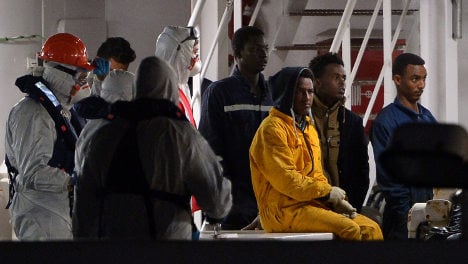 Rescued migrants off the Libyan coast arrive at the harbor in Catania. Photo: Alberto Pizzoli/AFP

"It's shameful of Europe," a high-ranking EU official told AFP after a boat carrying more than 700 people — perhaps as many as 1,000 – capsized off Libya days after a series of similar accidents sparked international outrage.

Amid the anger caused by the Lampedusa disaster of late 2013, in which 366 people drowned off Italy while seeking to reach Europe's shores, the EU finessed plans to deal with the problem.

The action plan outlined at the time included improving the legal means of migration, combatting people-smugglers, beefing up the cash made available to Frontex, the EU's frontier control agency, and rewriting the rules on dealing with migrant and refugee arrivals.

There has been no real follow-up however.

"The latest tragedies on the Mediterranean show how urgent it is to agree a share-out of responsibility," said Cecilia Malmstroem, the EU's former migration commissioner.

But at a summit on the issue in December 2013, EU leaders merely agreed to "prioritize efforts to stop departures" and show "appropriate solidarity" on dealing with new migrant arrivals.

The EU's current migrant and refugee regime is set out in what is known as the Dublin II accords. They require that the country of first arrival – most often Italy recently – process migrants as well as asylum and be
responsible for expelling those whose applications have been rejected.

A European Commission proposal to review the rule in the interests of better burden-sharing was flatly rejected by 24 of the EU's 28 member states.

Only Italy, Greece, Cyprus and Malta – on the frontline of the migrant tide – backed the idea.

Malmstroem said European politicians had allowed populist and xenophobic movements to dictate policy and put the emphasis on repatriation.

'Something has to change'

Now, public anger and shock over the steadily mounting death toll at sea may force a change.

"These are people like you and me – they're not cockroaches," thundered The Times of London, referring to controversial remarks made by a British newspaper columnist that "gunships" should be used on migrant boats to turn them back.

Malmstroem's successor, Greece's Dimitris Avramopoulos, is set to introduce a new approach to the problem in May.

Among his initiatives are greater funding for Frontex's Triton operation monitoring the Mediterranean, new European programmes and facilities to handle incoming migrants, and legal and security rules "for people fleeing conflicts."

Central to Avramopoulos' push is his conviction that "something has to change" in the logic of the Dublin II accord, which leaves each country to deal with its individual share of the bloc's immigration problem, limiting collective measures.

Among these was setting up centres to examine immigration and asylum requests at major departure points in Africa to help stop people from setting out in rickety boats for a perilous journey across the Mediterranean sea.

"The only way to truly change the reality is to address the situation at its roots," a Commission statement read.

Italy suspended its Mare Nostrum search-and-rescue operation late last year in protest over its rising cost and it was replaced by a smaller and much more restricted EU-led mission called Triton.

The recent flood of migrants and the growing loss of life have put Triton in the spotlight, with EU diplomatic sources saying Monday there was an emerging consensus that it had to get more resources to cope with the growing problem.

EU leaders will hold an emergency summit on the issue on Thursday and will be under intense pressure to come up with concrete proposals.

EU foreign and interior ministers meeting on Monday came up with a ten-point plan for action to be submitted to the leaders at the summit.