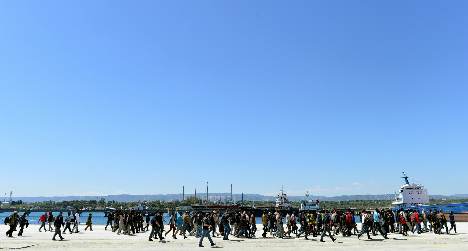 The year-long operation saw 166,000 people rescued, at a monthly cost of €9 million, but came to an end last October largely owing to political pressure and budget constraints.

An estimated 1,750 migrant deaths in the Mediterranean so far this year has prompted calls for Mare Nostrum to be restarted, a process which Lauretti said could take just a few hours.

“The Italian Navy stands ready. We have well-rehearsed procedures. We have built our experience. If we are asked, we can re-start a humanitarian operation in a very short time, 48-72 hours, give or take,” he said in Amnesty International’s report, Europe’s Sinking Shame, released on Wednesday.

An emergency meeting of European governments on Thursday is set to decide the EU’s response to the crisis unfolding in the Mediterranean, following criticism of the bloc’s own Triton mission.

Although Triton was widely seen as a replacement for Mare Nostrum when it began in November 2014, its budget is a third of the Italian operation and its focus is on border control.

“While the end of Mare Nostrum has not led to a drop in departures, it can however reasonably be linked to an increase in deaths at sea,” Amnesty said in its report.

“Triton’s contribution to enhancing search and rescue capacity in the central Mediterranean, although not negligible, remains insufficient to face the current and foreseeable demand for search and rescue in the coming weeks and months,” it said.

Amnesty is now calling for a multi-country rescue mission in the Mediterranean, describing Mare Nostrum as “the benchmark of what is required as a minimum”.

Iverna McGowan, acting director of the organization’s European institutions office, said countries which do not border the Mediterranean cannot put the burden of a “spiralling humanitarian crisis” onto one country.

“The European Union is the sum of its member states, this is a regional issue. Their credibility on human rights is seriously at stake here,” she told The Local.

While there has been “a glimmer of hope” this week as European governments have called for action, McGowan remained cautious of leaders’ willingness to act. “The record over the past year and a half has been a cause for concern, there have been emotional statements but there hasn’t been action.

“Thursday is going to be the litmus test on the EU saving lives,” she said.

In addition to calling for a Europe-wide migrant rescue mission, Amnesty in its report said financial and/or logistical support should in the meantime be given to Italy and Malta to save lives.

The organization also pushed for the European Commission agenda to include providing safe and legal routes to the EU for refugees. Governments, meanwhile, should create more resettlement places, humanitarian admissions and visas for those in need, Amnesty said.