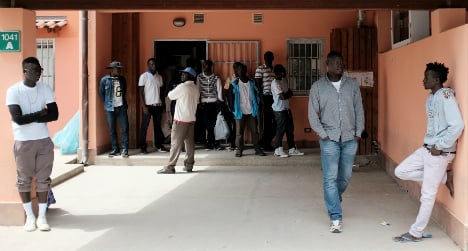 They may have escaped with their lives from Europe's worst maritime disaster in decades, but they are now likely to spend at least a year waiting behind the high barbed wire fences of Sicily's "refugee town" to find out if they will be sent back.

But for the soldiers patrolling the perimeter, the huge camp at Mineo in the east of the island looks like a surreal suburb – rows of small, identical houses dropped into the wheat fields and orange groves near Catania, where many of the exhausted and traumatized refugees are brought ashore.

Mamadou Dialo just feels lucky to be alive. He survived five nights on an inflatable dinghy with 100 other migrants last week, with only a five-kilo bag of dates between them to eat.

Fights over the dates and rows because of cultural and religious differences made the crossing even more fraught.

"I knew it would be long but I thought we would have a big boat. But you cannot turn back, you just have to go on," the student said.

"The biggest problem was the disagreements between people. And when the big boat (the Italian coastguard vessel) arrived, it was everyone for themselves, everybody wanted to be saved first," he said, still visibly shaken.

"Now I just want to rest… and I want to start my studies again."

He may have a long wait. Nearby a group of young Gambians have had enough of living in limbo in the camp, which holds 3,200 migrants, a sixth of those in Italian centres. "I have been here ten months and 26 days. We have no school, no papers, nothing," one of them said. "And we get macaroni every day. It's like a prison."

Yaya, 35, who spent three months in a rebel jail after leaving his wife and children in 2010 to find work in Libya, laughed at the comparison. However, even if the gates of the camp are open during the day, "14 months without being able to work is hard".

As on the rickety boats that brought them to Italy, relations between various groups of refugees can also be tense inside the camp.

Its 35 nationalities are a snapshot of the world's most troubled and desperate corners. Most are from Africa but many too have been made long and hazardous journeys from Bangladesh and Afghanistan.

The slow-drip tension over whether they will get refugee status, be allowed to stay on humanitarian grounds, or deported, sometimes boils over.

Mediators and a system of elected representatives from each group are sometimes needed to smooth over disputes, the camp's director Sebastiano Maccarrone said.

"This camp should have been an emergency centre, but it has now become normal," he said.

Nearly 80,000 people were waiting in other camps, migrant centres and hostels across Italy for a decision on their status, even before this month's latest wave of refugees.

The deadening wait – with so many, mostly young men, stuck in the middle of nowhere with little to do – weighs heavily in the Mineo camp.

For migrants, Italy is often seen only as another step deeper into Europe in search of the better life they dreamed about in their homelands. Two out of three of the migrants bolt from the camp, usually to head on to northern Europe.

But some though have chosen to wait it out in the hope that Italy will look kindly on them.

"Life here is good, you eat three times day, but it's tough, said Ali, a 23-year-old Somalian. "You wait, you wait…In my country, there is no freedom, no peace, no money. I want freedom, I want a real life."