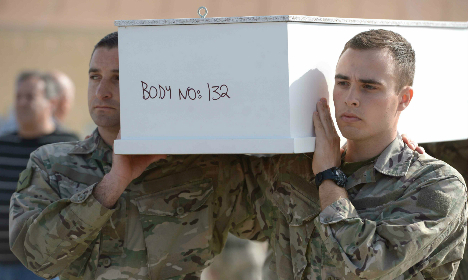 Maltese soldiers carry a coffin during the funeral of 24 of the migrants who died in the shipwreck. Photo: Matthew Mirabelli/AFP

The Prosecutor's office in the Sicilian city of Catania on Thursday identified the 26 men who, along with two crew members, were the only survivors of Sunday's catastrophe, saying publication of the names by the media was the only way they could inform friends and family.

They are 12 Malians, four Eritreans, three Bangladeshis, two nationals of Senegal and Somalia and one each from Sierra Leone, Ivory Coast and the Gambia.

The men have described how the people smugglers operated a reign of terror while the migrants were held prior to embarkment in a disused building near the city of Tripoli.

Anyone who did not immediately obey orders was beaten with sticks, fatally in several cases.

Taken by truck to the coast, the migrants were then ferried by dinghy to the waiting boat, on which most of them were packed into the hold or a lower deck from which it seems they had no chance of escape when the vessel capsized and sunk.

A boy who climbed on to a dinghy before being told to was killed by the smugglers and his body tossed overboard, one survivor told the investigators.

Several survivors testified that the building where they were held was run by armed men in uniform. One said he had seen men he assumed to be Libyan police officers being paid off prior to the boat's departure.

The survivors said other migrants had perished from illness or exhaustion.

Based on their testimony, the Catania prosecutor said he believed there were more than 750 people on board the boat when it left Libya.

He has asked the navy to send a submarine to photograph and film the sunken wreck so that he can assess whether to try and salvage it for the purposes of the investigation.

The investigators said the passengers had paid anything between 1,000 Libyan dinars ($730) and $7,000 for their passage to Italy. They could not establish why the amounts varied so significantly.