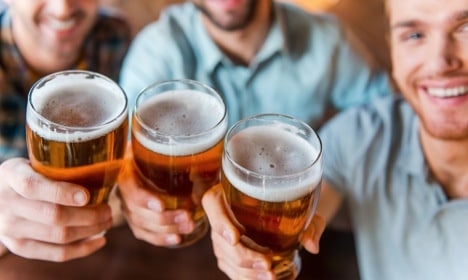 According to figures from Istat, the national statistics agency, 8.2 million Italians aged 11 and over drink excessive amounts of alcohol. Drinking photo: Shutter

Annalisa Coppolaro-Nowell, an Italian journalist, is more than familiar with the British penchant for a tipple or two.

In fact, it was the binge-drinking antics of British people that drove her out of the UK after 15 years of living there, she said in column for The Guardian newspaper earlier this month.

She wrote that she wanted to return to Italy, where the approach to alcohol is altogether different.

“Being Italian, I was brought up to associate alcohol with food,” she wrote.

“It shocked me that in the UK people seemed to need booze to have fun.”

But is the Italy she returned to becoming more and more like the Britain she left behind? Istat, the national statistics agency, revealed last Thursday that 8.2 million Italians aged 11 and over drink excessive amounts of alcohol.

Excessive drinking is said to be most prevalent among the over-65s, the 18-24 age group and adolescents, the agency said.

Meanwhile, a report by the Ministry of Health last year also indicated a change in drinking habits, with people supping less wine with meals but increasingly drinking away from the dinner table. Efforts have been made to curtail heavy drinking over the past few years, such as raising the legal age limit from 16 to 18.

Rome also bans drinking on the pavements in popular nightlife areas after 10pm each summer.

But more than legislation, it seems to be the culture around alcohol consumption that is influencing behaviour.

For a start, wine and other alcoholic drinks have always been cheap in Italy –  you can buy a litre of wine for less than a euro in some supermarkets.

And whereas getting drunk was once considered to be taboo, something that could see you ousted from your social network, it is now much more acceptable, and in some cases, even respected.

Roberto Cipriani, a professor of sociology at Rome’s Tre University, tells The Local that Italy has always had the “Saturday night fever”, but this has now been extended to Friday nights.

“Binge drinking is increasing among young Italians as a trend that helps people to meet others, talk to others and bring about new friendships,” he adds.

He also says the broadcasting of live sports events in pubs and bars has given Italians more opportunities to get drunk.

“A football game live on television is associated with an almost compulsory consumption of large amounts of alcohol.”

The influence of the British-American drinking culture, with pubs and offers on alcoholic drinks, has also been exported to Italy.

In tourist hotspots such as Rome’s Campo de' Fiori, British-style pubs with names such as “The Drunken Ship” have flourished, offering two-for-one cocktails and happy hours.

These places attract young tourists coming to Italy on budget flights to party for a few days, but also young Italians.

“Drinking has always been in Italian culture, but in a good way,” Andrea, a 22-year-old from Rome, tells the Local.

“Now, young people mix every type of alcohol just to get drunk. I think that’s just to imitate some role models outside of the Italian culture, like the Americans for example.”

Anna Coppolaro-Nowell, the journalist, is back home in Siena.

She admits there’s now more of a tendency among students to drink more than they used to, but insists that moderation is still the rule among most people of all ages, at least in central Italy.

“Rome and Milan tend to have more drinkers,” Coppolaro-Nowell tells The Local.

Still, she adds that she’s yet to go to parties where “people get systematically drunk until they feel sick”.

“When friends and family from abroad visit us in Tuscany, they still notice how much less we drink compared to people in England, the USA and Sweden,” she says.

“In the summer you more frequently see people enjoying extra drinks, but the number of teetotalers is far higher than in the UK, according to statistics.”