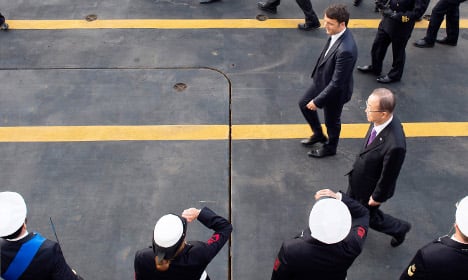 The symbolic visit to Italy's San Giusto vessel off the coast of Sicily came just over a week after more than 750 people drowned in the Mediterranean's worst migrant shipwreck yet, amid a recent spike in the number of people attempting the perilous crossing from north Africa.

"I think it seems to be the worst humanitarian crisis since the Second World War. So many thousands of people have lost their lives in their pursuit for a better future," Ban said according to remarks sent to the media by the UN.

"Not a single country – like Italy – can bear all this responsibility," he added.

Brussels also wants UN approval for an EU military operation against the people smugglers in Libya who organize the hazardous crossings, often on overcrowded, rickety boats. "Stopping the human traffickers to prevent a humanitarian catastrophe is an absolute priority for which we continue to have the support of the United Nations," Italian premier Renzi was quoted as saying by Ansa news agency upon his return to shore.

Monday's high-level gathering at sea was billed by the EU as a show of "solidarity" with those affected by the migrant crisis.

It came ahead of a series of meetings planned by Mogherini this week to win support for "a common effort to address the issue of migration", the EU said in a statement at the weekend.

Renzi, who has branded the people smugglers "the slave traders of the 21st century", is a staunch proponent for military action against smugglers.

But rights group have been critical of the plan and Ban himself has said there can be no military solution to the high-sea tragedies.

The UN chief appeared to confirm that stance on Monday when he said it was important to tackle the "root causes" of why people are leaving their countries in the first place.

"We also have to find (a) political solution, on the ground, particularly in Libya," he said, adding that he was counting on the European Union's "continuing leadership".

Mogherini on Sunday said it would not be easy for the EU to secure a UN mandate, or the approval of the Libyan authorities, which have not yet formed a unity government. Many of these people are smuggled in on boats from Libya, which has long been a transit country for African migrants.

People fleeing violence in the Middle East, especially in Syria, are also using Libya as a transit country.

On Monday, an Italian navy ship reached the southern port of Taranto with 274 migrants on board after they were rescued at sea.

Rights groups have repeatedly warned that migrants are aware of the deadly risks involved in travelling across the Mediterranean on rickety boats, but that their desperation to flee war and poverty pushes them to make the journey anyway.

In a bid to obtain UN approval for a military deployment, Mogherini will travel to the UN headquarters in New York on Tuesday and meet with US Secretary of State John Kerry in Washington on Wednesday.

Aid groups predict that if the migrant crisis continues unabated, there could be 30,000 deaths at sea this year and Italy will have to process 200,000 migrants landing in flimsy boats on its soil.