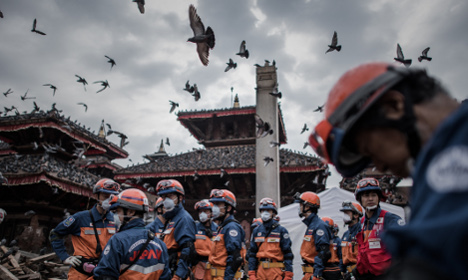 Rescuers from Japan are seen in the historical centre of Kathmandu, Nepal, on April 29th 2015. Photo: Philippe Lopez/AFP

Four Italians were killed in the Langtang area in northern Nepal when a 7.8-magnitude earthquake hit the country on Saturday. They were identified by their companions, the Italian foreign ministry said in a statement.

Sixty-year-old Benedetti and Pojer, 53, were killed by a landslide while trekking in the Rolwaling Valley, Ansa said.

They were accompanied on the expedition by Iolanda Mattevi, who was injured, and Attilio D'Antoni, who escaped unhurt.

The other two Italians killed were part of a group of four cavers reported missing in the immediate aftermath of the earthquake. Piazza, 55, and 51-year-old Mancinelli also died in a landslide. Their fellow cavers, Giuseppe Antonini and Giovanni Pizzorni, survived the earthquake.

The Italian government said on Tuesday it had established contact with a number of its citizens in Nepal, although it was still trying to reach around ten people.

More than 300 Italian had been present in the earthquake zone, the foreign ministry said. Following the quake the Italian government said it was arranging for its citizens to be flown out of Nepal.

Foreign Minister Paolo Gentiloni also ordered a €300,000 contribution be made to the Nepalese Red Cross, while Italy was also involved in a €100,000 aid package sent from a UN base in Dubai.

At least 5,000 people were killed in the earthquake, with officials warning the final death toll could reach 10,000. The UN on Monday said eight million people have been affected.