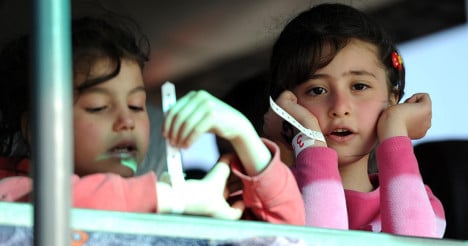 "Many people have died, my best friends and my sisters and my brothers have died in the wave to come to Italy," wrote the 12-year-old girl in a letter released on Wednesday.

"What I can say is only to tell you people who want to come don't come please, my brothers and sisters, because (it) is hard to say goodbye," added the girl, who asked for the letter be made public.

The child arrived on April 14th in Reggio de Calabre in southern Italy with the 150 survivors of a shipwreck which is thought to have killed 400 migrants.

She speaks very little and has just begun taking walks with volunteer workers, but the child has been writing in a notebook.

"I come from Gambia. I cross the sea to come to Italy," she wrote in her letter.

"Please, please and please. Because of saying this word I know what I saw and I say many things that I can not say."

The Gambian girl is being housed by the humanitarian group Pope John XXIII Community, which made the letter public.

The girl and her parents, who she has not talked about for the moment, set out from Libya with her brother in the hold of a boat, according to preliminary findings.

But the family paid extra money for the girl and her older sister to travel on the deck on the boat.

The boat capsized on April 12th, likely due to a rush of passengers to one side of the vessel after the arrival of a rescue boat.

The girl survived thanks to her older sister, who died in the process.

One week later at least 700 immigrants were killed on April 19 when their rickety trawler sank between Libya and southern Italy, sparking global outrage and demands for a solution to the string of deadly migrant shipwrecks.

Some 1,750 migrants have died crossing the Mediterranean to Europe this year, 30 times more than during the same period in 2014.

The group works in several African countries and houses over 800 migrants at its centres in Italy.