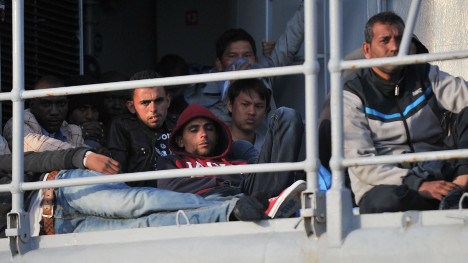 "They said there were 137 people aboard an inflatable boat that deflated or exploded – it wasn't clear – and that some of them fell overboard. Some said 'very many' died, others said 'around 40'", Giovanna di Benedetto of Save the Children told AFP.

The survivors were part of a group of close to 200 migrants who were on two separate boats and were rescued in recent days in waters off Sicily.

The survivors arrived on Tuesday in Catania on the east coast of Sicily, on the cargo ship "Zeran", which also carried five bodies.

According to the survivors, the incident occurred shortly before the weekend's rescue operations, in which the Italian navy and coastguard rescued nearly 6,000 people with the help of several merchant ships.

On Monday more than 3,000 migrants landed in southern Italian ports, including a baby girl born on board the Italian navy patrol ship Bettica.

Her mother had gone into labour just before leaving Libya aboard one of four barely seaworthy boats whose occupants were rescued by the Bettica.

This weekend's surge in the number of boats leaving Libya was put down to the fine weather and calm sea conditions.

More than 1,750 people are estimated to have died in the waters between Libya and Italy since the start of this year.