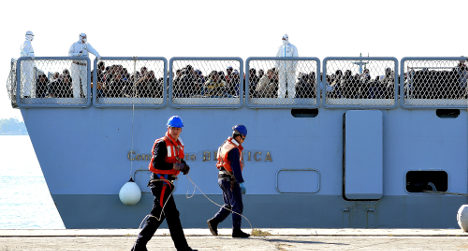 A surge in both the numbers of migrants reaching Europe from north Africa and deaths at sea have led to calls for the European Union to consider a similar approach, with the aim of deterring people from contemplating the journey in the first place.

But Admiral Donato Marzano, who will host a seminar of navy supremos from 26 European countries here on Friday, suggested it would not be feasible, morally or practically, to start escorting barely seaworthy migrant boats back to conflict-wracked Libya when they were crammed full of people, including minors, pregnant women and others who could be seriously ill.

"There are several countries that apply a policy of expulsion, even by force of arms, others apply the international right to rescue," the Admiral said when asked by AFP if Italy could learn from Australia's experience.

"I am a sailor who has spent 20 years on boats. If I find a boat adrift, I'm sorry but I don't turn away.

"I intervene to help people at sea. I don't know if this reflects my Italian culture but I do know it is international law.

"A vessel in difficulty, whether it is a boat full of migrants or a merchant ship, has to be assisted."

Australia has advised the EU to follow its lead and Prime Minister Tony Abbott said this week that his officials were in touch with their European counterparts on the issue.

EU officials in Brussels have denied any such contact, suggesting there is little appetite for a move that would inevitably cause an outcry from rights groups.

Some right-wing leaders including France's Marine Le Pen have backed the Australian model as a solution to migratory pressures which have resulted in around 5,000 people drowning in waters between Libya and Italy since the start of 2014.

Marzano said navy chiefs would do what their political masters asked them, but said he did not detect any enthusiasm for moving away from search-and-rescue operations aimed to minimising the loss of life while trying to find other ways of stemming the migrant flows.

"If there is a political decision to do other activities like expulsions, then we will have to find the appropriate solution for the situation but at this moment that doesn't seem to me to be the situation," the Italian admiral said.

Friday's talks on the security environment off Europe's southern coasts are expected to be dominated by the issue of illegal immigration but will also touch on questions of the movement of terrorists and piracy.

"Australia is not involved in these discussions but obviously it is involved in other international fora and the Australian experience is one that can be discussed and compared," Marzano told AFP.

"But the problem of clandestine immigration is so incredibly complex, I don't think any magic formula exists otherwise we would already have found it.

"We have a crisis situation that has many different aspects and which from a European perspective is without precedent.

"All we can do is share our experiences and try to resolve a problem which is getting ever more urgent."