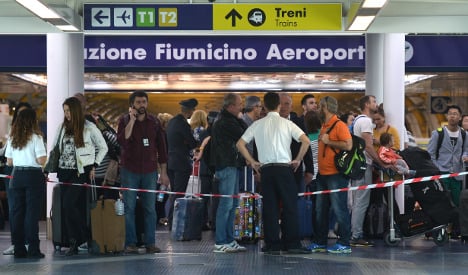 The city's main airport was closed to passengers for several hours after a blaze triggered by an electrical fault in a bar broke out in terminal three, which is used for international flights.

The fire erupted shortly after midnight and was not brought fully under control until more than five hours later, by which time the authorities had decided to cancel most of the morning's flights and close the airport to passengers. A shopping area in the terminal which is home to a string of upmarket boutiques was devastated.

"The bit beyond the security gates where the shops are has been completely destroyed but the rest is usable," said Lorenzo Lo Presti, the head of Airports of Rome, the private company which runs Fiumicino.

Firefighters said it could take several days to make the area hit by the fire safe.

Vito Riggion, president of the national civil aviation authority, told reporters at the airport that the cause was "probably a short circuit."

Police do not suspect any foul play.

Earlier this morning American Twitter user @glassrapier, who is currently in Rome on holiday, told The Local that his midday flight to Atlanta Georgia with Delta Air Lines had been delayed until 3pm.

"I've determined that international flights are simply delayed until after the airport is open again but we're still worried about access," he told The Local from his hotel in the capital.

There were angry scenes at Rome's main railway station where thousands of passengers arrived to discover all trains to the airport, which is on the coast around 30 kilometres (20 miles) west of the city, had been cancelled.

The express train link to the airport resumed in mid-morning.

The first planes carrying passengers were not due to leave until after midday (1000 GMT) and airport authorities were hoping normal service would be resumed by 1200 GMT.

That looked optimistic with chaotic scenes at Terminals one and two, where a backlog of thousands of passengers had built up by early afternoon, exacerbated by people being switched from the fire-hit building.

One of the companies which flies in and out of terminal three, British Airways, had to cancelled five of its eight daily flights to Rome and was not anticipating its first arrival before early evening.

Intercontinental flights arriving after overnight trips from the United States and elsewhere were able to land on Thursday morning and some planes took off before midday with only crew on board to ensure they could meet schedule commitments elsewhere.

Alitalia, the airline which has the most flights to and from the airport, advised passengers they could switch to alternative flights up until May 10th or have the price of their tickets reimbursed.

Other airlines made similar commitments, in line with European Union regulations in such situations.

Have your travel plans been affected by the fire? Leave a comment below or contact us at: [email protected]