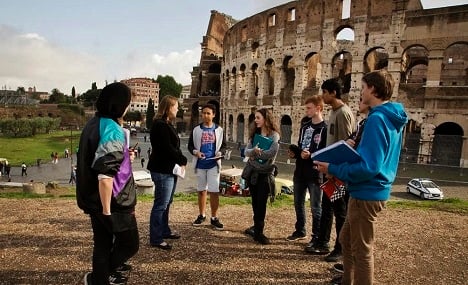 It's 7:30am on a Tuesday and Jonah Mayer is faced with an unusual choice for most American teenagers: a leisurely breakfast with a few dozen friends — or a jog around the Vatican.

“I can go to the Vatican any day of the week,” Mayer tells The Local. “I can jog past a building that’s iconic all over the world. Rome is a city that never runs out of surprises.”

In many ways, Mayer is an average American upper secondary student. He spent most of his life in West Chester near Philadelphia. He enjoys football (or soccer), video games, and hanging out with friends.

But his high school education has been far from average.

Mayer is currently enjoying his second year as a boarding student at St. Stephen's, an international day and boarding high school nestled in the heart of Rome. When Mayer found out his family was relocating to Rome, he was thrilled, but anxious. He travelled to Italy on his own a half year ahead in order to start the academic year there.

“I was pretty nervous about the whole transition process,” Mayer confides. “The whole thing, the possibility of moving to Rome and it actually happening, went very quickly. It didn’t feel real.”

Mayer’s family now lives just a stone’s throw from campus. But Jonah Mayer chose to continue the boarding experience for the atmosphere.

“I walked in and everyone was sitting in a big circle in this room we call the Chapel, and it was like, ‘Wow, this is really happening,’” he says. “And I very quickly felt at home.”

Mayer said he appreciates the boarding programme because it prepares students for life, offering a stepping stone to independence.

“It seems like there’s been an epidemic recently of students burning out in college because they’re not prepared,” he says. “Boarding school is a great middle ground.”

Waking up in Rome

St. Stephen’s, founded in 1964, boasts a tight-knit community of 275 students from around the world – 40 of whom are boarders and constitute a 'nuclear family' at the school, along with ten boarding faculty who also live on-campus.

“I love this boarding programme because of the intimacy,” English teacher and Co-Head of Boarding Katherine Young tells The Local. “We are ten adults working with these 40 students, so all the adults know all of the kids quite well.”

Mayer, who wakes up “pretty early for a boarder”, gathers with his international ‘family’ for breakfast each morning at 7:45am, talking, laughing, and building relationships.

“I have a 45 minute breakfast and hang out with the other boarders, and then gather my books and head off towards class,” Mayer says. “I love all my classes this year.”

The schedule is different depending on the day of the week, but his favourite is economics.

“It’s not really a typical class I would have taken if I hadn’t come here,” he adds, “but the teacher I have made me really fall in love with it.”

And since arriving at St. Stephens, discovering new passions and interests has become something of a trend for Mayer.

“I don’t really consider myself someone interested in English either, but this year – wow, poetry,” he exclaims. “I have teachers who help me look at subjects in ways I’ve never seen them before.”

Indeed, St. Stephen’s teachers are one of the school’s main selling points.  Of the diverse faculty, 83% have advanced degrees, and 20% have earned a PhD. This translates to a group of talented professionals who transmit their passion and enthusiasm for learning to their students.

“The teachers are unreal. Having teachers who are so excited about their subjects gets me excited,” Mayer adds with a grin.

And that vivacity continues into the afternoon.

“Lunch is full of laughter,” Mayer says. “There’s a terrace and benches, and a lot of people in the cafeteria too. There’s a lot of energy during lunch, and it’s nice to catch up.”

The small but diverse community is valued by teachers and students alike.

“We have people from Russia, Mexico, the US, Austria…it’s great,” Mayer exclaims. “It’s a vibrant mix, with all of these people from diverse backgrounds just hanging out.”

Indeed, the school is home to students of 39 different nationalities and offers nine different languages. St. Stephen’s is also an IB Diploma certified school and has Advanced Placement classes as well, making its programme competitive for students planning to study in the US or anywhere else across the globe.

“It’s a liberating cultural atmosphere,” Mayer says. “I’m used to this social hierarchy from my other schools, but here everyone is laid back. There aren’t those social constructs and divides.” When afternoon classes end, many of the students go directly to club activities. For Mayer, it’s football – not just physical activity, but a truly unique cultural experience.

“I wouldn’t consider myself the most skilled soccer player in the world,” he laughs. “And I’m playing with a lot of other students who have been playing for a really long time, especially the Italian kids. It’ something they grew up with.”

But on the field it doesn’t really matter, he says. It’s competitive – but it’s not something to stress about, Mayer says.

“It’s a place where all the cultures wash away and we’re just out there having fun.”

Following evening activities, the boarding students gather for a communal dinner at 6:20pm – an “early American dinner” by Roman standards. And it’s not just about food – it’s a valued social event for students and teachers alike.

Community issues and activities are discussed, birthdays are celebrated, and students express their appreciation and thanks for special moments enjoyed throughout the school week.

“When 6:20 comes around I am drawn down to the dining hall because it’s a time when the community really comes together,” Michael Mottola, the other Co-Head of Boarding at the school, tells The Local. “There’s a wonderful energy and a wonderful buzz. It’s a relaxed family environment.” For Mayer, the true highlight of the day comes as the light is fading on the city and the campus. After dinner the students gather for study sessions, snacks, and conversations.

“We just hang out and have the craziest conversations,” he explains. “The other night we found ourselves debating the morality versus economic necessity of sweatshops in China. And you think, how did this even come up?”

Mayer says it’s an experience he may not have had if not for boarding.

“I feel so much more aware, and being in a group with all these people with different ideas has really opened my eyes.”

And a key ingredient of success at St. Stephen’s is that this diversity is not just in the classroom, but permeates the entire community, creating long-lasting relationships.

“The boarding community is very tight-knit,” Mayer says. “There’s basically an open-door policy, and no one is ever surprised when you barge into their room.”

The boarding students are split into separate floors for male and female students, and Mayer said that it’s common for “the guys” to hang out playing video games and guitar.

And the relationships extend beyond campus. The boarders share “community night” once a week, go out for dinner, have movies nights, field days, service activities, and much more. There are also group activities offered every weekend, such as the annual beach trip.

“It’s great,” Mayer exclaims. “It feels like we are all very academically motivated, but at the same time you’re living in a hall with a bunch of cool people to hang out with.” One of the key goals at St. Stephen’s is to promote individual growth in every way, not just during school, but for the future. When speaking with students and teachers about their experiences there, one word crops up again and again: transformative.

“We get to be involved in watching these kids grow not just academically, but also emotionally,” Co-Head of Boarding Katherine Young reflects.

“The kids who are outliers in some way really shine here. And they love what they experience here.”

“The community offers a great deal of support, and it’s something I love being a part of, he says. “Working with students in a residential setting is something I enjoy very much.”

Mayer has been changed and transformed by his time at St. Stephen’s. He says the boarding experience in Rome has accelerated his growth and challenged him to accomplish things he didn’t know he could do. Rather than black-and-white, he now sees the world in a million shades of grey.

“I’m more aware as a human being from living in this melting pot,” Mayer says. “I’m exposed to it every day and every night, and it just soaks in. And it’s fantastic. It’s invaluable.”

This article was produced by The Local in partnership with St. Stephen's Boarding School.