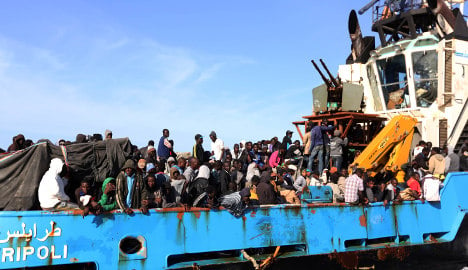 A Libyan coastguard boat carrying around 500 mostly African migrants arrive at the port in the city of Misrata on May 3rd, 2015. Photo: Mahmud Turkia/AFP

Pakistanis made up the largest group awarded protection status with 2,420 positive decisions, or 11.7 percent of the total. Italy also welcomed 2,400 Afghans and 2,145 people from Nigeria.

Italy rejected 41.5 percent of applicants in the first instance, with 20,580 people out of a total 35,180 given protection status. A further 45 people were granted asylum on appeal.

More than 750,000 people have received asylum in the European Union since 2008, with Germany and Sweden consistently taking in more asylum seekers than any other countries.

The figures come as the EU’s foreign policy chief Federica Mogherini appeals for UN backing for Europe’s plan to confront the Mediterranean migrant crisis by using military force against smugglers.

This year alone, more than 1,800 people have drowned when boats run by migrant smugglers have capsized in the Mediterranean, a 20-fold increase over the same period last year.

Already 2015 is shaping up as the deadliest ever for refugees seeking to reach Europe through the Mediterranean.