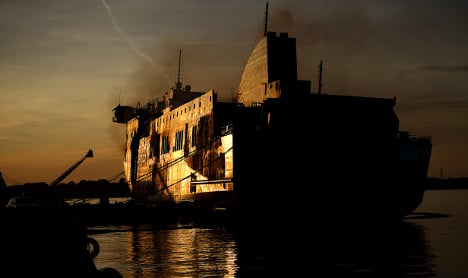 The fire happened just months after a major fire on the Norman Atlantic Ferry (pictured) which killed at least 11. Photo: Filippo Monteforte/AFP

The fire broke out at around 1am on the car deck of the ship when the vessel was just seven miles from the Puglian coast, Ansa reported.

The ship, named ‘Francesca’, was travelling from the city of Bari to the Albanian coastal city of Durrës, where it was due to arrive at 8am on Thursday morning.

Around 260 passengers and crew were on board, mostly Albanians.

As soon as the alarm went off, the crew prepared the lifeboats and began operations to extinguish the flames. The fire was extinguished at around 2:30 am.

The vessel returned to the port of Bari pulled by tugboats later at around 7am.

According to the president of the Bari port authority Francesco Mariani, the passengers will be given refreshments and transferred to another vessel at around midday on Wednesday, which will transport them to Durrës.

None of the passengers suffered injuries, Mariani said.

An Albanian road haulier, who had friends on board the ferry, described seeing smoke streaming out of the ship from the shore in Bari.

“From the coast you could see smoke coming from the boat,” he told TGcom. “When they phoned me to say that a fire had broken out on board the ferry I ran to the port. They told me that they were scared”.

This isn’t the only ferry fire to hit headlines in recent months.

At least 11 people lost their lives after the Norman Atlantic ferry, which was travelling from Greece to Ancona, north-eastern Italy, caught fire off the coast of Albania before dawn on December 28th.