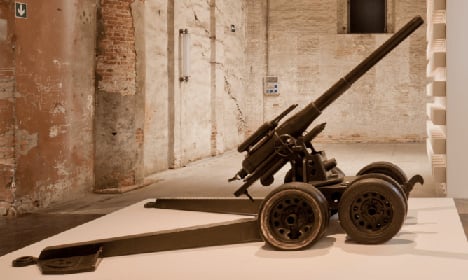 This year’s edition is open to the public till November 22nd and feels huger and more disorienting than ever before.

At the heart of the present-day Biennale is a themed exhibition organized by a star curator. This year Nigerian-born Okwui Enwezor, previously artistic director of the 2002 edition of Germany’s epic five-yearly Documenta exhibition and present-day head of Munich’s Haus der Kunst, has shouldered the task. Even before its public opening on May 9th, his show All the World’s Futures was provoking complaints in print and online. “Brutal”, “didactic”, “pedantic”, “morbid”, “an assault course” and “a glum trudge” were representative reactions. This general dismay perhaps won’t have taken Enwezor by surprise. His curatorial scheme is confrontational, global in its address, but also tightly site-specific. It delivers an undisguised history lesson about Venice’s past, re-stocking the Arsenale with guns, and bringing Marx back to the birthplace of the production line. Both the show’s venues – the labyrinthine Central Pavilion of the Biennale’s Giardini and the cavernous warehouses of the Arsenale – are studded with intentionally abrasive, disturbing objects. Or there’s Harun Farocki’s 1968 film White Christmas, which pairs Bing Crosby’s schmaltzy hit with photo-documentation of the Vietnam war. It is utterly horrible; ditto the archive film of whaling and polar-bear hunting recycled by John Akomfrah in his 2015 installation Vertigo Sea. But Enwezor isn’t mining this tough subject matter to strike a provocative pose. (That he can leave to bad-boy Swiss artist Christoph Büchel, whose shallow gesture of converting a decommissioned Venetian Catholic church into a mosque has in just a few days garnered more media chatter than Enwezor’s considered, effortful project probably will across its whole run. Büchel, bizarrely, is Iceland’s Biennale representative and his project is outside Enwezor’s remit.)

Enwezor’s rationale is certainly didactic. His history lesson aims both to survey recent politicised art globally, and needle the local facts of the Biennale’s site. In representation at least, he’s stockpiled the Arsenale’s halls with more weaponry than it’ll have seen since its decommissioning in the early 1800s. To frame this, Enwezor invokes the ideas of Karl Marx. Readings from Das Kapital (organised by UK artist Isaac Julien) will take place throughout the Biennale, in architect David Adjaye’s performance arena within the Central Pavilion. The readings are effectively indigestible, but their function is to remind.

Venice isn’t just the site of the world’s first ghetto – it also pioneered the production methods eventually exploited by Ford, the very foundations of the capitalist economy. In the Corderie or ropeworks – now stuffed with contemporary art – and across the Arsenale, standardisation, production-line methods and a workforce of thousands allowed the Renaissance Venetians to make in days, even hours, what other Europeans took months to manufacture.

A hard pill to swallow

Enwezor is bringing it all back home, heaping Venice with testimony to the ruinous side effects of capitalist progress: pollution, slavery, exploitation, the arms industry, the mass displacement of peoples. His 2015 Biennale has to rate as the most precisely site-specific installation in the event’s history, and inevitably it’s a hard pill to swallow.

In sum, All the World’s Futures works brilliantly as representation, but it fails desperately as strategy. His show’s title feels cruelly ironic. Despite the inclusion of a live performance space, discussions, music, singing, screenings, and so on, few exhibits counterbalance Enwezor’s bleak panorama with models of hope or inspiration.

These have to be sought elsewhere – for example, in the German pavilion, where supercharged smarty-pants Hito Steyerl scores another hit. Weaving together historical fact and fantasy with imagination and fiendish digital skill, this German-Japanese artist’s video installation, Factory of the Sun, delivers a high-tech kick in the pants: think harder, get clever, understand the information war that’s underway right now. There’s a youthfulness here, an appetite for action, that’s missing from Enwezor’s exhibition, and is sorely needed.