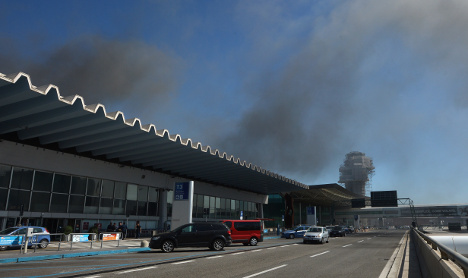 Smoke is seen over Rome's Fiumicino international airport where a fire broke out overnight on May 7th. Photo: Tiziana Fabi/AFP

The workers, who are employed by a company in charge of the maintenance of the airport’s air conditioning units, were seen on CCTV working in the room where the fire broke out in the days leading up to the fire.

They had been installing an air conditioning unit in the room in order to stop an electrical panel from overheating, Il Fatto Quotidiano reported. However, the unit turned off because it was not connected to an external power source.

They are now being investigated for suspected arson.

The fire, which happened on the night between May 6th and 7th, ripped through Terminal 3 at the airport, devastating the shopping area, which is home to a string of upmarket boutiques.

Hundreds of flights were cancelled as a result and thousands of passengers had their travel plans wrecked.

Minister of Infrastructure and Transportation Graziano Delrio paid a visit to the burnt-out terminal on Friday morning.

He told Ansa that the terminal operations were almost back to their “optimal functioning”.

International flights are almost back to their usual schedule, he added, while work was still to be done next week to get the national gates back to normal.

The terminal, which is one of four at the airport, serves flights to European countries outside the Schengen no-borders zone and destinations further afield with the exception of Israel and the United States.