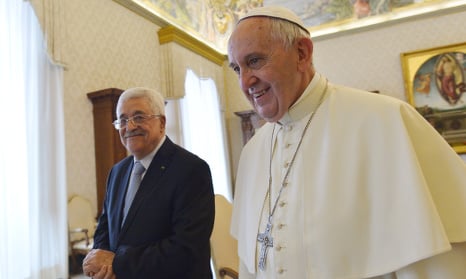 Abbas met the pontiff for about 20 minutes at a private audience, which
came a day before the head of the Roman Catholic Church was due to canonise
two Palestinian nuns, who will become the first Palestinian Arabs to gain
sainthood.

The Vatican said in a statement the pope and Abbas discussed the peace
process with Israel and that “the hope was expressed that direct negotiations
between the parties be resumed in order to find a just and lasting solution to
the conflict”.

“To this end the wish was reiterated that, with the support of the
international community, Israelis and Palestinians may take with determination
courageous decisions to promote peace,” it said.

The two men also touched on other conflicts in the Middle East and the need
to combat “terrorism”, it added.

They exchanged gifts with the pope giving Abbas a medal with a figure of
the angel of peace “which destroys the evil spirit of war”.
“I thought of you because you are an angel of peace,” he told Abbas.

On Wednesday the Vatican announced that it was preparing to sign its first
treaty with Palestine, two years after officially recognising it as a state.
A bilateral commission is putting the final touches to the agreement, on
the Catholic Church's life and activities in Palestine.

The agreement would “be signed in the near future”,  the Vatican statement
said.

The news of the treaty drew ire from Israel earlier this week.
“Israel heard with disappointment the decision of the Holy See to agree a
final formulation of an agreement with the Palestinians including the use of
the term 'Palestinian State',” said an Israeli foreign ministry official.

“Such a development does not further the peace process and distances the
Palestinian leadership from returning to direct bilateral negotiations. Israel
will study the agreement and consider its next step.”