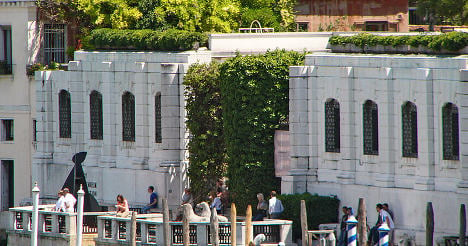 At the tender age of 13, Peggy Guggenheim inherited unimaginable wealth when her metal magnate father Benjamin went down on the Titanic, money she used to collect and display contemporary art.

After amassing a collection including works from – among others – Cocteau, Picasso, Miro, Matisse and Salvador Dali – she bought the Palazzo Venier dei Leoni on the Venice Grand Canal and began to display the priceless pieces.

As she neared her death in 1979, she handed over the palace and the collection of 326 works to the Solomon Guggenheim Foundation based in New York and run at the time by her cousin Hardy Guggenheim.

But now, one of Peggy's grandsons, Sandro Rumney, has launched a court battle over how the collection is managed, calling for it to be restored to its original configuration.

Lawyer Olivier Morice said it was about “respecting the wishes of Peggy Guggenheim to see the collection intact”.

The plaintiffs complain that works from other collections are now being displayed at the Palazzo, diluting Peggy's work.

They hired bailiffs to analyze the displays, finding in 2013 that there were 94 pieces from the Guggenheim collection and 75 works from the Schulhof collection, put together by a couple of American art collectors.

This “breaks with the original arrangement that Peggy wanted and which should be respected after her death”, the plaintiffs argue.

They want the collection's original state restored, as well as “protection” in the palace garden around a plaque marking Peggy's ashes – a “grave” they believe has been desecrated.

The appeal is taking place in France because Rumney and his children live there, but they already suffered a setback in July when a lower court threw out the case.

The Paris lower court said the case had already been settled in the 1990s when it was ruled the collection could not be considered as “protected”.

The Guggenheim Foundation said it was “proud to have faithfully respected the wishes of Peggy Guggenheim for more than 30 years by keeping her collection intact”, restoring the palace and running the “most visited modern and contemporary art museum in Italy”.