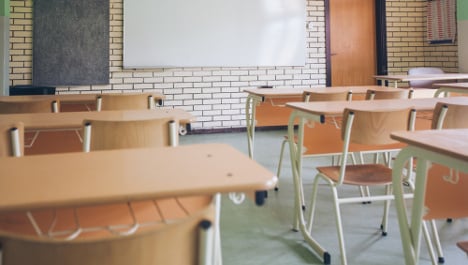 The letters were found in the girl's diary, which had been thrown in the bin. Classroom photo: Shutterstock

The girl, described as a model student who hopes one day to become a lawyer, received six letters in which she was insulted because of her academic ability and the colour of her skin.

The letters were found in the girl's diary, which had been thrown in the bin, local newspaper Il Tirreno reported.

In one of the letters, the girl was told: “There’s no such thing as a black person becoming a lawyer”. Another read: “When will you return to your f*****g country?”

By the time she received the sixth letter the girl’s father, who is from Senegal and has lived in Italy for 15 years, decided to go to police.

He also went to the girl’s school to talk with her classmates.

“In my speech I tried to be passive,” he told Il Tirreno. “‘To me you are all my children,’ I said. No one looked uncomfortable. It was as if the story regarded someone else.”

The messages allegedly started when teachers published the grades of the students in the class about a month ago.

“My grades are quite high,” the girl, who has not been named, told the paper. “In law I got top grades because I like the subject and I like the teacher.”

The letters, four of which were typed and two handwritten on lined paper, have now been handed into the school and police.

“I honestly don’t suspect anyone,” the girl added. “I don’t like the situation because knowing that there are people in my class who think these things about me is really painful.”