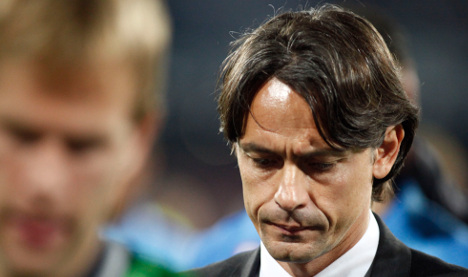 Silvio Berlusconi has effectively confirmed that AC Milan coach Filippo Inzaghi will be sacked at the end of what has been a bitterly disappointing season. Photo: Carlo Hermann/AFP

“Inzaghi has a good relationship with the squad but on many occasions we have had different visions (of what to do),” the club's billionaire owner was quoted as saying during a visit to a supporters group on Monday evening.

“That is something we will express (to Inzaghi) at an appropriate time. We are deciding what to do.”

The media tycoon went on to indicate he was already considering possible replacements but appeared to play down the possibility of a return for former boss Carlo Ancelotti by saying: “We need to talk about concrete names”.

Ancelotti, who guided Milan to 2003 and 2007 Champions League triumphs, is expected to leave Real Madrid at the end of the season with the Spanish giants set to end the campaign without a major trophy.

But his past record means he is likely to have more attractive options than a return to cash-strapped Milan.

Italy and former Juventus boss Antonio Conte may be a more realistic target for Milan. “Let's see, this is not the place to talk about that,” Berlusconi said when asked about that option.

Berlusconi, who is seeking outside investors to help him revive the club's fortunes, said Inzaghi had ignored his request for players emerging from the club's academy to be given a chance.

“There are some interesting youngsters at the club and I expressed the desire to see some of them given a chance in the first team but the request was not acted upon,” Berlusconi said.

The Milan owner's indication that Inzaghi's fate is already decided followed a 3-2 defeat on Sunday by Serie A minnows Sassuolo which ended the seven-times European champions' lingering hopes of playing in Europe next season.

After the match Inzaghi pleaded for more time to turn things around. “I hope to stay because I still have so much to offer,” he said.

A stay of execution looks extremely unlikely however. With two games left to play, Milan sit 11th in the Serie A table and on course for what could end up being their worst season since Berlusconi acquired the club three decades ago.

Inzaghi, 41, is widely seen as having been out of his depth since stepping up from coaching the youth team to replace his former team-mate Clarence Seedorf in June 2014. The former Juventus, Milan and Italy striker has one year left on his contract.

Berlusconi said discussions with potential new investors in the club were continuing but a scathing put-down for Thai businessman Bee Taechaubol suggests he is no longer in the frame.

“To buy Milan there needs to be something more than a search for popularity,” Berlusconi said.

Earlier this month the media tycoon was said to be on the verge of selling a 51 percent stake in the club to a group headed by Bee for €500 million ($550 million).

That deal now appears to have floundered over the terms on which the Thais could have acquired a further tranche of the shares.

Berlusconi, 78, has since hinted that he might be having second thoughts about relinquishing control of the club, having refocused his attention on football since completing a community service order for tax fraud earlier this year.

“We will see if it will be possible for me to give it my complete attention,” said the former prime minister. “We have to get back into Europe as soon as possible. At my age lifting trophies is something that can only do you good.”