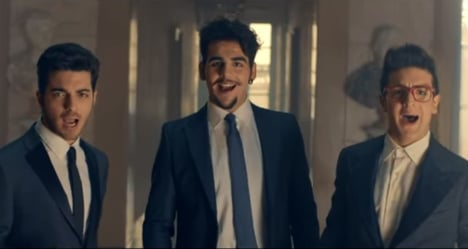 Il Volo are well known both in Italy and abroad, especially in the States and South America. Screengrab: IlVoloVEVO/YouTube

Traditionally, Italy performs well at the Eurovision Song Contest – when it chooses to enter at all, that is.

The country has withdrawn from the contest altogether on a number of occasions, with broadcaster RAI citing a lack of interest in the competition.

But this year the contest looks likely to attract more viewers back in Italy with an entry by the operatic pop trio Il Volo, featuring Piero Barone, Ignazio Boschetto and Gianluca Ginoble.

Unlike Italy’s last few entrants they are actually well known both at home in Italy and abroad, especially in the States and South America.

The trio, who hail from Sicily, Abruzzo and Bologna, first met in 2009 while competing in the Italian televised singing competition Ti lascio una canzone, where they performed as solo artists.

The show’s creator then had the idea of putting the teens together in a group and soon after they were offered a recording deal.

The group were initially named I Tre Tenorini (The Three Little Tenors), after internationally renowned The Three Tenors, before changing the name to The Tryo. In late 2010 they became Il Volo (The Flight in English) and released their first album with the same name.

Since then they've grown from strength to strength, performing on several American TV shows including American Idol, Good Morning America, The Ellen DeGeneres Show, The Early Show and the Tonight Show. In 2012 they toured with pop diva Barbara Streisland.

Earlier this year the trio, now in their early twenties, won first place in the Sanremo Music Festival, the most famous pop music event in Italy, which in turn secured them the chance to play at Eurovision.

Their entry, 'Grande Amore', a song about undying love, will be performed entirely in Italian (see an English translation below), but according to one Italian reviewer that won’t stop them from winning. Far from it.

“Singing to these people in Italian words like ‘Amore, non mi lascerai mai, amore, grande amore, solo amore, respiro dei giorni miei, amore…’ and they will jump up and fall prey to an Italian delirium like Super Mario before a little mushroom,” writes Fran Altomare on the website Optimagazine.

They’ve been tipped as favourites to win, along with Swedish heartthrob Måns Zelmerlöw and Guy Sebastian of Australia, which will be entering as part of a special 60th anniversary edition of the contest.

This year will see forty countries competing, up from last year's 26. Italy, along with Austria, France, Germany, Spain, the UK and Australia, automatically gains a place in the final.

But will amore conquer all?

That remains to be seen in the Eurovision Final in Vienna this Saturday.

The Eurovision final will be broadcast live on Rai 2 at 9pm on Saturday.