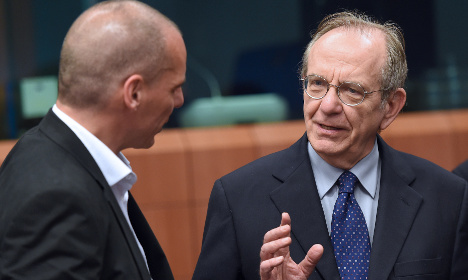 If Greece abandons the euro “the monetary union becomes a different animal. A group that is possible to leave, it will no longer be irreversible,” Finance Minister Pier Carlo Padoan said in Friday's issue of La Repubblica.

Earlier in the eurozone debt crisis investors were highly concerned about the precedent of a Greek euro exit, leading to a spike in borrowing costs for other eurozone states including Italy, Spain and Portugal.

Only a pledge by the European Central Bank to do “whatever it takes” to save the euro calmed the markets and ended this “contagion” from Greece.

Padoan's comments come as there are rising concerns Athens is running critically short of cash and may soon end up defaulting, which could set off a messy exit from the euro.

Padoan doesn't see a contagion risk now from a possible Greek euro exit, primarily because of the ECB's massive stimulus programme under which it is snapping up an average of €60 billion ($67 billion) of eurozone debt per month.

A Grexit “doesn't worry me because of the European Central Bank interventions under way,” he said.

And “Italy is in a much solider position than two or three years ago,” he added.

But in the medium-term the precedent of a euro exit might lead to other cases where doubts about a country resulting in market pressure limiting its ability to borrow and pushing it out unless the ECB intervenes.

Regarding Greece, Padoan said the issue of the sustainability of Greece's debt, and differences between the IMF and European Commission on this point had been overdramatised.

He said Greece's debt, which the European Commission expects to reach 180 percent of GDP this year, is “sustainable with reasonable growth and public accounts in order.”

The IMF's rules prohibit it from lending to a country if its debt levels are judged to be unsustainable, but as EU countries now own much of Greek debt, the issue is highly sensitive.

Greece's radical left government has in the four months since coming to power failed to agree with the EU and IMF on what reforms it must implement to release a final €7.2 billion ($8.2 billion) in bailout funds, with billions in debt repayments coming due in June and July.

“I believe that it is the moment for the Greek government to put credible proposals on the table and concrete measures on pensions, the labour market and the fiscal system,” said Padoan, highlighting the issues that have been holding up an agreement.