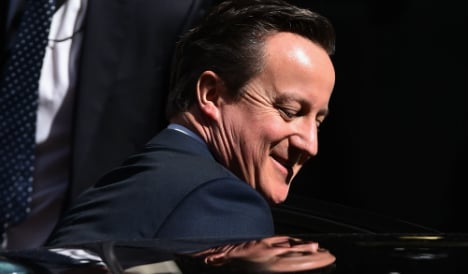 UK Prime Minister David Cameron, who has announced that UK citizens living abroad for less than 15 years will be allowed to vote in the EU referendum. Photo: Ben Stansall/AFP

Prime Minister David Cameron made it an electoral pledge to hold a referendum on whether to stay within the EU, a vote that will take place by the end of 2017.

Number 10 only announced on Sunday who would be able to vote in the referendum, and eligibility will be roughly the same as in a UK general election.

Give us a vote: we've got most to lose if UK quits

This means British nationals who have been living abroad for less than 15 years will have their say on whether or not the UK remains in the European Union.

But those living abroad for more than 15 years will not be allowed to vote on the future of the UK in Europe, the new voting criteria confirms.

The EU Referendum Bill will be officially announced after the Queen's speech on Wednesday, and legislation confirming the voting eligibility for the referendum will be introduced to Parliament on Thursday May 28th.

Alongside British citizens, those eligible to vote will include Irish and Commonweath citizens resident in the UK, including those from Malta and Cyprus.

Eligibility will also be extended to voters in Gibraltar, even though they are not allowed to particpate in general elections.

Gibraltar’s Chief Minister Fabian Picardo said, “David Cameron has been true to his word to the people of Gibraltar and, as a British part of the EU, our voice will be heard as part of the franchise for this seminal exercise in democracy.”

Around one million other EU nationals who are resident in the UK will not be allowed to vote in the referendum, however.

British citizens under the age of 18 will also not be eligible to vote, provoking calls, led by the Scottish National Party, for the voting age to be lowered to 16, as it was in the Scottish independence referendum in September 2014.

Prime Minister David Cameron is due to meet with several European leaders this week to discuss EU reforms. He will meet with the leaders of Denmark, France, Germany, the Netherlands and Poland while also meeting with EU President Jean-Claude Juncker in the UK on Monday.

Many British residents abroad are likely to vote for the UK to remain a member of the European Union.

“If we leave the EU then the UK’s trade will go down and it will achieve the magic combination of raising inflation and unemployment simultaneously while dramatically slowing inward investment — economic suicide,” Mark Adrian Soloman, a British resident in Spain, commented on The Local’s Facebook page.

“Being married to a Spanish citizen and having two children, I think I’d be OK,” Jules Renault commented, “…but imagine all the Brits here who have invested so much in moving to Spain and have nothing that ties them to this country…”

“I think I should have a say,” Shelagh Moore commented on The Local Spain’s Facebook page, “It affects me more (than UK residents). I stand to lose all that we worked damned hard for back in Britain, such as pensions. Not all Brits abroad are wealthy old people living the good life.”