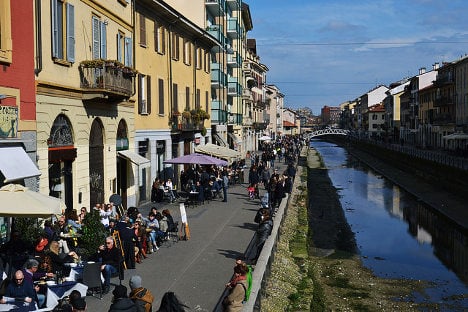 There's nothing more Milanese than an aperitivo in the Navigli quarter. Photo: Irene Grassi/Flickr

A trip to the Duomo in the heart of the city is not to be missed. Climb (or take a lift) up to the top of the Gothic cathedral, where you can enjoy unrivalled views of the city. If you’re not lucky (or rich) enough to snap up a ticket for a performance at Milan’s world-famous opera house, don’t despair. You can still visit the museum attached to the theatre, which is dedicated to the history of the opera house and Italian theatrical history in general. For a truly Milanese experience, skip dinner and have an aperitivo instead. Not familiar with the concept? It’s a drink with some free food thrown in, and normally takes place between 6 and 9pm. For a lavish buffet spread, try the Bulgari Hotel or Roialto; or for something less pricey and quintessentially Milanese, try Bar Basso, whose owner is famous for inventing the Negroni Sbagliato – an “incorrect” version of the classic Negroni , with gin substituted for the usual Prosecco. You’ll also find plenty of places in the Navigli quarter (see below). The Navigli quarter takes its name from the two canals that run through it: the Naviglio Pavese and the Naviglio Grande, partly designed by Leonardo Da Vinci. Navigli is one of the best areas for nightlife: in the evening, it’s usually packed with 20 and 30-somethings. Dotted with bars and restaurants, it’s a great place to drink and eat or simply to watch the sunset reflected in the water. But watch out for the mosquitoes… This exhibition at the Palazzo Reale, the largest ever to be dedicated to the artist in Italy, coincides with the Expo and will remain open until July 19th. Entitled Leonardo 1452-1519, the exhibition includes drawings, paintings and sculptures by the Renaissance artist. The Expo itself will be packed with food stalls from all over the world. But if you’re looking for exclusively Italian nosh, then Eataly is a good place to go. Located on Piazza XXV Aprile, this high-end indoor market comprises a variety of stalls selling food and beverages. Great place to find a special gift for foodie friends back home. Located in the centre, Brera is the historical core of the city. It’s home to the Brera Academy of Fine Arts and the Pinacoteca Brera gallery, both of which contribute to its reputation as an artsy, bohemian neighbourhood – similar to that of Montmartre in Paris. Here, you’ll find some of Italy’s greatest masterpieces by artists such as Caravaggio, Piero della Francesca, Tintoretto, Mantegna and many more. You may be wondering why the Last Supper (Cenacolo in Italian) isn’t on this list. Unless you book months in advance, then you’re unlikely to see Leonardo Da Vinci’s masterpiece. But fear not. Around the corner is another artistic marvel that won’t be so overrun with tourists. This sixteenth century church is part of the Monastero Maggiore, a convent owned by the Benedictine order, and now home to an archaeology museum. Highlights include frescoes by Da Vinci’s pupil Bernardino Luini as well as the original partition wall that separated the nuns from the congregation. Milan prides itself on being the fashion capitol of Europe – so it’s definitely worth having a look at the shops. For high-end boutiques, head to Galleria Vittorio Emanuele II, said to be the world’s oldest shopping mall. There you’ll find the first Prada shop as well as other Italian classics: Armani, Gucci and Versace, among others. For other designers, head to the four streets known collectively as the Quadrilatero d’Oro, literally “the golden rectangle”. For more alternative fashion, go to Corso di Porta Ticinese or Brera. Had enough of Milan? Try taking a day trip to Como, to bask in the sun and the stunning scenery. As well as the world-famous lake, must-sees include the Duomo di Como in the historic centre and the Tempio Voltiano, dedicated to the physicist Alessandro Volta, who was born in Como. You may also be lucky enough to catch a glimpse of Hollywood star George Clooney, who owns two properties in the area. Just bear in mind that you risk a fine of €500 if you come within 100 metres of his villas. What have we missed? Leave a suggestion in the comments section below.