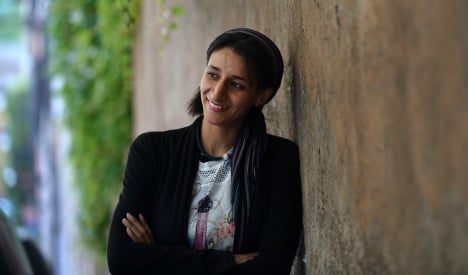 It was an early morning in the summer of 2013 when the fragile-seeming Sicilian 27-year-old took the first panicked call: hundreds of Syrians were lost in the Mediterranean aboard a boat taking on water.

Caught unawares, she called the Italian coastguard, who quickly explained how she, a fluent Arabic speaker thanks to her Moroccan heritage, could tell the terrified migrants how to find their GPS coordinates on their satellite phone and ensure they could be rescued.

After several long hours of silence, Soufi breathed a sigh of relief: everyone on the boat had been saved.

Since that morning, the same scenario has been played out hundreds of times and Nawal — as she is universally known in Italy — has become a symbol of hope for many migrants risking their lives to make it to Europe.

“A call can come at any time. Migrants at sea shout: 'There are 500 people on board, we have been at sea for 10 days and there is no more water,'” the young woman tells AFP on the sidelines of the launch of a book about her life: “Nawal, the refugees' angel.”

No time for mourning

On one recent night, it took her five hours to calm a caller enough to get the only information that counts in such moments: the position of the boat.

The 345 passengers on board — a third of them children — were all saved.

“Italy has a reception system that is full of holes but its rescue system is one of the best in Europe,” she says proudly.

Born in Morocco but an Italian resident from the age of three weeks, Nawal owes her current role to the passion she developed for the 2011 uprising in Syria.

In 2013 she was part of a team which took an ambulance full of medical drugs into Aleppo, handing out her phone number to everyone she met.

It has since been widely shared amongst would-be asylum seekers. Despite her placing direct contacts for the coastguard on her Facebook page, her phone continues to ring.

On the page, which is in Arabic, she regularly posts recordings of her telephone conversations along with her weary remarks about the horrors of the crisis.

“How in 2015 can we still think that the solution is for people to travel in these kind of boats.”

On April 20th, Nawal was on the quay in Catania, lost amidst dozens of reporters who had come to witness the arrival of 28 survivors of the Mediterranean's worst migrant disaster to date, which claimed the lives of some 800 people.

For her, there was no time for mourning, she was already taking yet another call on her clapped out old phone, which she retains because of its tireless battery.

On top of the litany of desperate calls from listing boats, she also fields anxious pleas from relatives trying to find out if a son, a mother or a husband have survived.

When she has tried taking a break and given her phone to friends or family to maintain the watch, it has always been handed back to her within a day by individuals who are unable to cope with the relentless stream of anxiety.

“You can only put up with it if you accept it as a mission. It is a heavy burden but the world is such a cruel place,” said Mussie Zerai, a priest who has been receiving similar calls from Eritreans since 2003.

“Fortunately there are young committed people like Nawal. I admire her courage, it is not easy, especially for a young woman in the south of Italy.”

When she is not on the phone, Nawal studies political science in Catania and works part time as an interpreter for the courts.

She also spends a lot of time at Catania station, where many newly arrived migrants seek to continue their journey to northern Europe.

“My work is to block the land-based traffickers, explain to the asylum seekers they can change their dollars in a bank or take a train for Milan without going through intermediaries,” she said.

Every evening she goes home to a loving and proud mother who asks only one thing of her daughter: that she answer her calls as quickly as the ones she receives from the Mediterranean.