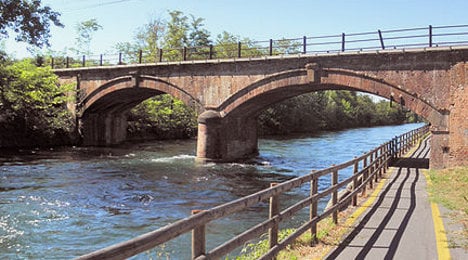 The accident happened when the boy jumped into the Naviglio canal in northern Italy. Photo: Friedrichstrasse/Wikimedia Commons

The incident happened at around 4:53pm on April 24th when the teenager jumped into a canal from a bridge with his friends in the town of Cuggiono.

When the 14-year-old failed to come up to the surface his friends searched in vain, their rescue efforts hampered by the canal's murky waters.

They alerted emergency services who sent divers to recover him from the canal.

When the boy was finally pulled him out it was 5:35pm, 42 minutes after he had gone under water.

The teenager had gone into cardiac arrest and was taken by helicopter to San Raffaele hospital.

Doctors treated him using Extracorporeal Membrane Oxygenation (ECMO), a process involving the use of an artificial lung located outside the body that puts oxygen into the blood and continuously pumps the blood through the body.

WIthin ten days he had made a full recovery, but had to have his right leg amputated below the knee due to circulation problems.

Alberto Zangrillo, director of Anaesthesia and Resuscitation at the hospital described his recovery as an “exceptional event, the kind that makes us think that some parameters regarding survival in a state of hypoxia (reduced oxygen supply to the body) must be revised.”

According to Zangrillo it was all thanks to the determination of the medics who gave the boy a cardiac massage and continued to resuscitate him in the helicopter on the way to hospital.

“Without this,” Zangrillo said, “it would have been useless.”

Quoted in La Stampa newspaper the boy’s mother described his recovery as a “miraculous event” while the boy’s father said he was “extraordinarily impressed by the professionalism” of the hospital staff.