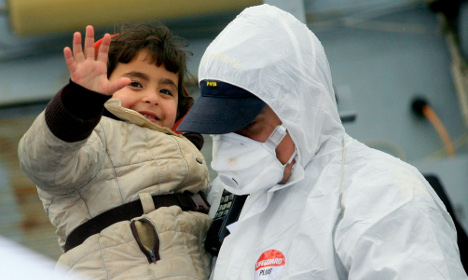 A child waves as a lifeguard carries him off a ship in Sicily, February 2015. Photo: Marcello Paternostro/AFP

Nearly seven months after the mission was launched by Frontex, the EU’s border control agency said Triton operations will be extended to 138 nautical miles south of Sicily.

“We have dramatically increased the deployment levels in the Central Mediterranean to support the Italian authorities in controlling its sea borders and in saving lives, too many of which have already been tragically lost this year,” he said.

The expansion of Triton follows widespread criticism of the EU mission, which has until now patrolled a significantly smaller area than Italy’s own operation, Mare Nostrum, which came to an end in October due to a lack of financial support from European countries.

The weaker operation under the remit of the EU has been blamed for the high number of migrant deaths in recent months, with an estimated 1,800 lives lost so far this year.

The death of around 800 people in one shipwreck last month led to greater support for Frontex’s mission by European countries. As a direct result the operation, along with the EU’s Poseidon Sea mission hosted by Greece, will be boosted by €26.25 million in extra funds over the next six months.

The money will be spent on extra rescue equipment and teams focusing on people smuggling networks, in addition to establishing a regional base for Triton in Sicily.

The Italian government has said up to 200,000 migrants could arrive on its shores this year.