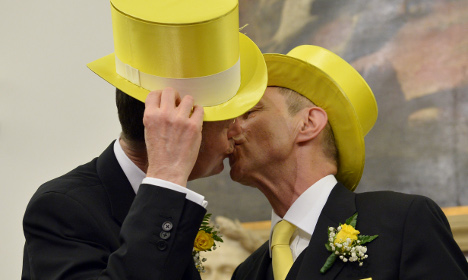 Two men kiss as they register their civil union at Rome city hall, part of a creative move by the mayor to support same-sex unions. Photo: Tiziana Fabi/AFP

The survey published by Italian daily La Stampa found that 51 percent of voters would support gay marriage in a country where the Catholic Church still wields considerable political influence.

Just over two thirds, 67 percent, said they were in favour of civil unions but opposition to adoption by lesbian and gay couples remains high at 73 percent.

If confirmed by further research, the survey suggests the example set by Ireland and other countries with a strong Catholic heritage is swaying thinking among Italians as traditional conceptions of homosexuality as a sin fall away in tandem with church attendance figures.

As recently as October, the relatively rare opinion polls on the issue were showing support for gay marriage running around one third.

The latest trend augurs well for a civil union bill currently being examined by a commission of the Italian Senate.

Prime Minister Matteo Renzi wants the bill put to a vote in the National Assembly before summer with the aim of legislation being enacted by the end of the year.

Renzi, the leader of the centre-left Democratic Party, needs to find allies across the political spectrum to pass a law that gay activists regard as a long overdue first step to full equality.

“It is a law we should have approved 15 years ago but it is quite a good one,” said Flavio Romani, the president of Arcigay, the country's main gay rights group.

“In Italy there is no law for couples, no law for single people, no law against homophobia, absolutely nothing. That shames our country.”

Romani blames what he sees as the excessive influence of the Catholic clergy on the political class for Italy's failure to keep pace with its western European neighbours.

The hostility of the Church to gay marriage was underlined on Tuesday evening when Ireland's 62 percent vote in favour was described by the Vatican's Secretary of State Pietro Parolin as “a defeat for humanity”.

Amgelo Bagnasco, the president of the Italian conference of bishops, on Tuesday reiterated the Italian Church's opposition to the civil union bill, saying it would undermine the institution of marriage by “in effect equalizing the legal status of homosexual unions with that of the family founded on the union between a man and a woman”.

But in an interview with La Republicca, Bagnasco also acknowledged the Irish referendum “has to push us towards a reflection aimed at understanding what we have to change in our approach”.

Campaigners for traditional visions of the family see civil unions as the thin edge of a wedge they want Italy to resist.

“If civil unions are allowed, the judges will soon add adoption,” said Massimo Introvigne, the president of “Si alla Famiglia” (Yes to the Family), an alliance of some 40 Christian organizations.

“Italy resisted divorce for 200 years longer than France. I don't know if we can hold out for ever but we have to be creative and not allow ourselves to simply imitate what others do.”

Creativity has been the order of the day in town city halls including Milan, Naples and Rome which have already introduced civil unions at the local level, offering same sex couples a certified status that some big Italian employers are also willing to recognize.