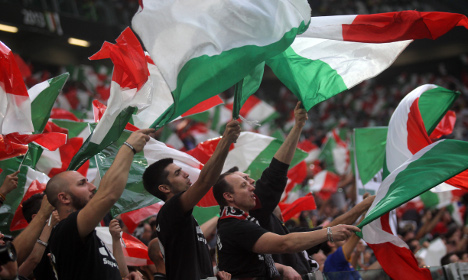 Football fans wave Italian flags during the Italian Serie A match between Juventus and Napoli on May 23rd 2015. Photo: Marco Bertorello/AFP

While champions Juventus warm up for their Champions League final against Barcelona with an away match at Verona on Saturday, Napoli host Lazio in a must-win clash at the San Paolo late on Sunday.

Lazio's 2-1 defeat to Roma in the city derby last week left them in third but with Rafael Benitez's Napoli three points adrift, and having beaten Lazio earlier this season to claim a head-to-head advantage, the pressure is on the Biancocelesti.

Lazio need just a draw on Sunday evening to secure a third-place finish and a place in the the Champions League playoffs.

Having also lost the Cup final to Juventus to add to the humiliation of their derby defeat to Roma, it would offer a pick-me-up to cap what has been a brilliant second half of the season by Stefano Pioli's men.

Captain Stefano Mauri told Sky Sport: “We deserve to be in the Champions League and we have to get the result against Napoli at all costs.”

It will be Benitez's last game in charge after club president Aurelio De Laurentiis confirmed on Thursday the Spaniard's departure after two years at the helm.

Although Napoli's only silverware this season was their Italian Super Cup win over Juventus, De Laurentiis quickly paid tribute to the Spaniard.

“Two years ago we were 46th in UEFA's rankings, now we are 20th and ahead of Roma, Milan, Inter, Liverpool and Sevilla,” he added.

“We are the only Italian team to have won two trophies (Cup and Super Cup), only us and Juventus.”

Qualification for next season's Europa League is not so cut and dried.

On paper, Napoli, Fiorentina and Genoa hold the league's three places although only Fiorentina are currently sure to go through.

Anything less than a draw at Napoli would see Lazio drop into the Europa League, while Genoa look to be out of the competition after failing to earn the UEFA licence required because their Luigi Ferraris stadium does not meet the norms of European football's governing body.

It has left Sampdoria and Inter Milan with the chance to snatch Serie A's third and final Europa place, although Inter, in particular, will require a healthy dose of luck on the final day when they host Empoli.

Sampdoria, who trail sixth-placed Genoa by four points, desperately need a win against already-relegated Parma but won't be taking Roberto Donadoni's devastated side for granted. Parma may be in Serie B after a season that has seen the former two-time UEFA Cup winners go bankrupt, enter administration and witness bailiffs walk off with equipment from the club's gym and facilities that ended up for sale on eBay.

But Parma have been determined to go down with a fight, Donadoni's men holding Napoli and then Verona to 2-2 draws, albiet at their Ennio Tardini stadium.

Inter, three points adrift of Sampdoria, need to beat Empoli and hope Parma stun Samp if they are to have any chance of joining the Europa League.

Former World Cup winner Toni, 38, will become the league's oldest ever top scorer if his 21-goal tally does not come under threat although the evergreen Verona striker is up against Juventus on Saturday.

Icardi said: “Luca Toni and Carlos Tevez have done really well, but seeing as they're facing each other this weekend maybe I'll be able to make the most of it. I hope to get the goals.

“As luck would have it, we have a tiny chance to qualify for Europe and we hope to take advantage of it,” he added.

“We've got one match left and we need to try and get the three points. We have to do as well as we can because you never know what's going to happen.”