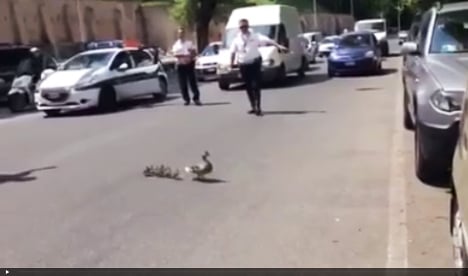 Why did the ducks cross the road? Screengrab: Facebook

Anyone who has travelled in the Italian capital will be wearily familiar with the chaotic traffic.

Luckily for a family of ducks out on a stroll in the city, Rome’s traffic police, the Vigili Urbani, were at hand to ensure them a safe crossing over a busy road in the city centre.

In the video posted on Facebook on Tuesday, the police are seen halting traffic by the Tiber river as they usher a mother duck and her eight ducklings across the road.

The family are then filmed waddling up the pavement for several minutes.

Since the video was posted on Tuesday it has been viewed over half a million times and shared by over 13,000 people.

Facebook users were filled with praise for the Vigili Urbani.

“Wonderful. Sometimes you also see good things in our marvellous [city of] Rome,” commented one user.

But according to the woman who posted the video on the social networking site it didn’t end well for all the ducklings.

In the comments section under the video she wrote that one of the ducklings was later gobbled up by a seagull.

Posted by Caterina Lucia Costa on Tuesday, 26 May 2015