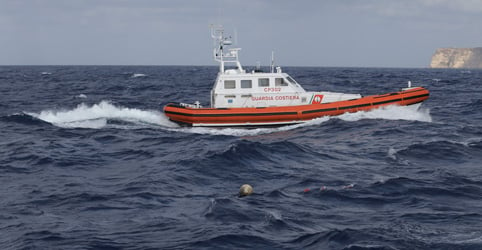 “We need your help, we need your help, please,” pleads a voice down the phone to the Italian coastguard. The chaotic call, made by satellite phone in broken English from a boat somewhere in the Mediterranean, is just one of many regularly received by staff at the service's emergency operational centre in southern Rome.

“What is your position?” the duty coastguard asks several times. “What are you coordinates?” he says, trying again. “How many of you are there?”

According to Filippo Marini of the service, the centre receives an “incredible number” of calls like this.

“Fortunately we have agreements with the satellite phone company which help us to find the geographical coordinates of the call and from that moment on we launch the rescue boats.”

In a spacious room at this huge, modern building, staff work around the clock monitoring screens showing the position of vessels and the latest weather conditions in the Mediterranean.

On a table in the middle of the room is their most important rescue tool — the phone.

Distress calls come direct from the migrants themselves and from their relatives anxious to alert the authorities to their plight.

Tensions at the centre sometimes reach a peak, such as at the end of last year when it had to simultaneously manage the arrival of a migrant ship abandoned by its crew, a fire on board a ferry in the Adriatic and a collision of two other boats.

“They brought us food on carts, we did not leave the room,” recalls one officer at the centre, Floriana Segreto.

The search-and-rescue zone covered by the Italian coastguard in theory spreads across half a million square kilometres.

But due to the crisis in Libya, the area has now been extended to around one-to-two million square kilometres.

'Race against the clock'

Over the past five months, the majority of boats have been inflatables in poor condition coming from Libya.

“Since January, we have recorded the arrival of 190 inflatables against 70 other different types of boats,” Marini said.

“All these small boats are overloaded and inevitably destined for a tragic end unless we intervene. It's always a race against the clock,” he added.

Gianluca Dagostino, another officer at the centre, told AFP that a swift response was crucial.

“The operation is immediate, a quick reaction represents our best weapon,” he said.

“The migrants' boats are sometimes 10 metres long with 100 to 120 people on board. It's incredible. In Italy there would be 10 to 15 people at most on boats of this type.

“Almost none of these migrants has a lifejacket. Death lurks behind every phone call,” he added.

This year alone, 1,770 men, women and children have either died or are missing at sea, according to the International Organization for Migration (IOM), while around 40,000 migrants have landed in Italy.

The coastguards are also keen to point out the vital rescue work carried out by others.

“We could not rescue all these people without the help of the cargo ships. Of the 170,000 people rescued last year 42,000 were rescued by them,” Marini said.

Now, following a few days of poor conditions and strong waves, fine weather has resumed — and with it the departures from Libya.

Suddenly, the coastguards have their hands full again. “Excuse us, we have an alert of four boats,” one of them says as they turn back to their screens.