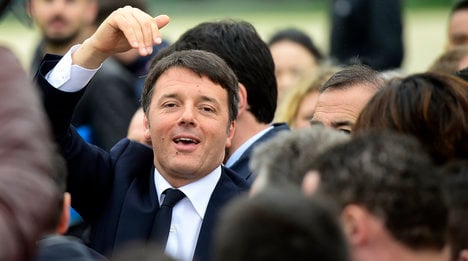 Italian PM Matteo Renzi was delighted by the rise in the number of people in work. Photo: Olivier Morin / AFP

Figures released by the national statistics agency, Istat, show that there were 159,000 more people employed in April. This represents a 0.7 percent increase on March in the number of people in work, and takes the overall percentage of unemployed people in Italy to 12.4 percent.

The unemployment figure is the lowest recorded since 2012, and was welcomed by the government as a sign that Italy's economy is on the road to recovery.

The figures were above what had been predicted for April and came as welcome news after disappointing data had been recorded for March.

The statistics were taken as proof that the new Jobs Act was working by the Italian premier, who tweeted: “We have 159,000 more people employed in April, the first full month of the Jobs Act.”

The Jobs Act is a series of reforms aimed at simplifying the world of work by reducing red tape and promoting long-term work contracts – it came into force in March.

The fall in Italian unemployment was above average for the eurozone area, which recorded a 0.1 percent decrease in overall unemployment for April.