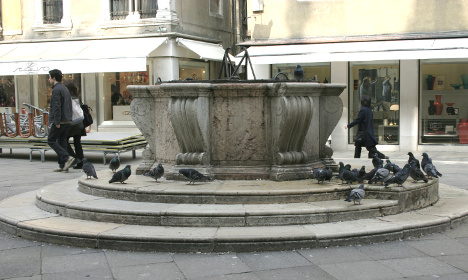 The tourists was photographed bathing semi-naked in the fountain. Photo: Nino Barbieri/Wikicommons

Apparently oblivious to the crowds of tourists around him, the man is pictured bathing in shorts in a fountain on piazzetta Leoncini, located near St Mark’s square in the heart of the city.

The photo was taken by a tour guide at around midday, who then sent it to the newspaper Il Gazzettino. Since the photo was published on Tuesday it has been circulated widely on social media and in the Italian press, attracting outraged comments from Italians.

“An outdoor museum, a city that everyone envies, disfigured and insulted in this way … we can’t tolerate this,” wrote one commenter.

Meanwhile in Florence police are currently working to identify vandals who broke a finger off Pio Fedi’s famous statue of the Rape of Polyxena.

Tempers are also running high in Rome after a group of drunk Dutch tourists were stopped by police for urinating in the city centre earlier this week. They were caught after residents complained of a disturbance in Piazza di Spagna, Il Corriere di Roma reported. The incident comes a few months after drunk Dutch football fans severely damaged Rome’s famous Barcaccia fountain.

The overall cost of the hooliganism to the city was set at €3 million.