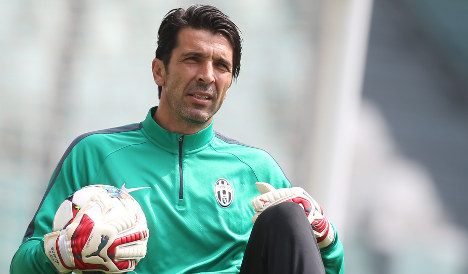 “We can't go there (Berlin) to make up the numbers. This match means far too much to us,” said Buffon, whose exploits for Juventus and Italy over two decades have hoisted the 37-year-old up among the sport's greatest goalkeepers.

Along with Italy and Juventus teammates Andrea Pirlo and Andrea Barzagli, Buffon has fond memories of Berlin's Olympiastadion – the scene of Italy's controversial World Cup victory over France in 2006 when Zinedine Zidane saw red in the final.

But reaching another Champions League was always just a dream.

“In my head I never had any doubts through these nine years, although at one point I had a serious injury, but I knew I wanted to get to the Champions League final,” Buffon said after Juve ousted Real Madrid over two legs to book their first final since their 2003 defeat to AC Milan.

“We need to take the last step, and most difficult step.”

For Buffon, it could be now or never but the prospect of trying to stop Luis Suarez, Lionel Messi and Neymar – who have scored 120 goals between them this season – is a challenge that seems to be growing on Juventus.

For striker Carlos Tevez, much of that confidence comes from the assured head and broad shoulders of Buffon.

“Having him in goal gives us outfield players confidence,” Tevez told Uefa.com.

“Scoring a goal against Gigi is difficult – that is the extra bit of security he provides.”

With 20 years of top level experience and a room full of trophies and personal accolades, Juventus – Italy's most successful side in Serie A – would not expect anything less.

Since he decided to swap a role in defence and donned goalkeeping gloves at the age of 12, Buffon has been a phenomenon, playing his first Serie A game by the age of 17, finishing league runners-up with Parma to Juventus in 1997 and qualifying for the 1997-1998 Champions League.

It was the first of Buffon's 12 Champions League campaigns, and the season he became known as 'Superman' after displaying a blue shirt with a giant 'S' in the middle when he stopped a penalty by Inter striker Ronaldo.

The following season, Buffon kept a clean sheet for Parma in a 3-0 Uefa Cup final triumph over Marseille. At 21 years old, Buffon was voted Serie A's top goalkeeper, won the Bravo Award for Europe's best under-23 player and his first nomination for the coveted Ballon d'Or.

Since joining Juventus in 2001 in a then world-record deal worth a reported €52m, Buffon has gone through thick and thin with the Turin giants since.

The Bianconeri reached their first final since their controversial 1-0 win over Liverpool in the aftermath of the Heysel Stadium Disaster in 1985 when they met AC Milan at Old Trafford.

Despite stopping shots by Clarence Seedorf and Kakha Kaladze in a dramatic penalty shoot-out, the then 25-year-old went home empty-handed as the Rossoneri triumphed.

“I immediately understood we had missed a unique opportunity,” Buffon admitted in an interview with Uefa's Champions Matchday magazine.

Three years later, after the eruption of the Calciopoli match-fixing scandal weeks before the beginning of Italy's triumphant World Cup campaign, Juventus were demoted to Serie B and stripped of their 2005 and 2006 Serie A titles.

Buffon is the only player still at Juventus to have remained with the club throughout.

In an ideal world, Buffon would cap the twilight of his storied career by finally conquering the Champions League.

But Buffon, for one, believes the Turin giants have what it takes to cause an upset.

“I think we have to realise that on Saturday we're facing the challenge of beating the best team in the world,” he said Monday.

“We have to be prepared, mentally, to suffer, and to have the strength to overcome any obstacles that come our way in this final.

“Messi is an extra-terrestrial… but we have what it takes to limit Messi, and the rest. We won't start as favourites, but we have a few things up our sleeves that won't make it easy for them.”