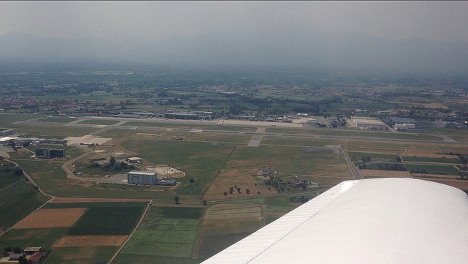 The Boeing 737 was taking off from Turin’s Caselle airport, bound for Catania, at 6.45pm on Sunday when the tyre of one of the rear left wheels burst, La Repubblica reported.

The jet, which had 154 passengers and six crew members on board, then circled above Turin for forty minutes, offloading fuel, before safely landing back at the northern Italian city’s airport.

“We heard a loud noise and were scared, also because at the beginning we didn’t know what was happening,” Storari, whose team lost to Barcelona in the final of the Champions League in Berlin on Saturday, was quoted by the newspaper as saying.

“We became suspicious when the plane continued to fly over Turin.”

The crew informed passengers that the jet was returning to Turin due to “technical issues,” Grazia Canizzaro, another passenger, said.

The runway was closed as the plane landed, while firefighters were on the scene in case of a fire.

“The crew was very efficient and in the end, there was no problem,” Storari added.

Investigations are now underway to check if the tyres had been properly maintained. A spokesperson for the UK-based Blue Air was unavailable for comment when contacted by The Local.

A new flight left for Catania late last night but not all the passengers, including Storari, got back on board.

“For a few minutes, my life flashed before my eyes, and I thought about my children especially,” 54-year-old Maddelena Lamedda, said.

“Take the plane again? Not a chance. I’ll take the train from now on and keep my feet on the ground.”