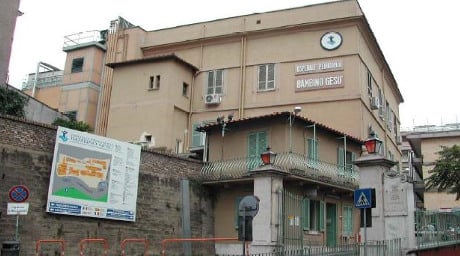 The treatment is being carried out by doctors at Rome's Bambu Gesù hospital. Photo: Marten253

This is the first time the treatment, which will be carried out by doctors at Rome's Bambino Gesù hospital, is being used in Italy, La Stampa reported.

It will be used to help the child fight chordoma, a rare cancer that affects the bones of the spine, most commonly the vertebrae at the base of the skull and the sacrum, at the bottom of the spine.

The brave patient will be administered with 41 individual sessions over a two month period.

Angela Mastronuzzi, a paediatric neuro-oncologist at Bambino Gesù hospital told Il Mattino: “In the USA, proton therapy has been used to treat paediatric patients for years, above all, those with tumours affecting the central nervous system.”
Cases of chordoma are extremely low, affecting approximately one in a million people.

Worldwide, just 48 centres currently use the treatment that involves using beams of protons generated by a particle accelerator to irradiate cancerous tissue.

The therapy's main advantage over traditional forms of radiotherapy is that it offers extremely localized treatment, making it especially useful when treating cancers affecting delicate areas like the spine.

A limited number of medical studies suggest proton therapy is a more effective paediatric treatment as it has a less toxic effect on the body.

Proton therapy hit the headlines earlier this year, after a British couple sparked an international manhunt when they removed their son, Ashya King, from a UK hospital so that he could undergo treatment at the Proton Therapy Centre in Prague.

King recovered from the illness, prompting the UK to announce that it will open its first three proton beam therapy centres – in London, Cardiff and Northumberland – by 2017.