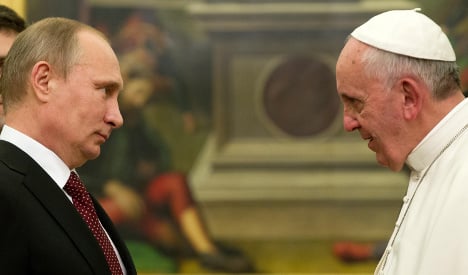 The conflicts in the Ukraine and Syria are likely to dominate the talks, organised on the sidelines of a visit to Milan 2015 Expo's Russian pavilion.

Putin, a champion of conservative values who denounces gay marriage and derides the West's ways, has been cold-shouldered by the United States and much of Europe over Russia's role in the Ukraine crisis but seeks an ally in the Argentinian pontiff.

It will be their second meeting. The first in 2013 was hailed a success by the Russian leader, who was chairing the G20 and was asked by Francis to find a diplomatic solution to the Ukraine situation without external military intervention.

But that meeting came before Russia's March 2014 annexation of Ukraine's Crimea peninsula and the subsequent conflict in the ex-Soviet country's east badly soured relations with Western powers.

“Putin wants to throw off his status as pariah. And he hopes that will work with the pope,” said Russian historian and religious studies scholar Boris Falikov. “But Putin's miscalculated,” he added, surmising that the pope will say “Russia's policy in Ukraine is frowned upon by both the Vatican and him personally.”

The Vatican has so far adopted a cautious stance on the conflict between Ukrainian authorities and pro-Russian rebels in eastern Ukraine, which has religious overtones. Francis has publicly voiced his frustration over “a war between Christians,” but has not heeded calls from leaders of Ukraine's minority Greek Catholic community to firmly condemn Russia's actions in Ukraine.

The rebels in Ukraine are mostly Orthodox with links to the Patriarch of Moscow, fighting other Orthodox and Greek Catholics who have ties to Rome. In February, Svyatoslav Shevchuk, head of the Ukrainian Greek Catholic Church, called on the pontiff to speak out against Russia, saying “indifference kills”, and insisting his flock “expected more from their spiritual father.”

Since Putin — a self-proclaimed Orthodox Christian and friend of the Russian Church — first met the Latin American pope, efforts to improve ties between the Vatican and the patriarchy have lagged. Decades of diplomacy seemed to be leading towards a historical papal visit to Moscow. It would have been the first such trip since the schism between Eastern and Western Christianity in 1054. But the Ukraine fallout has put the brakes on any such symbolic voyage for now.

Putin will insist that Russia has remained faithful to its traditional role as protector of Western Christians, Catholic and Orthodox alike. He is likely to remind Francis of his defence of regimes such as President Bashar Al-Assad's in Syria, known to have protected Christians.

One thing seems likely: whatever disagreements they may have, as Vatican-watcher Giuseppe Rusconi says, the pair are likely to agree on the importance of “defending non-negotiable values”, with a refusal to legalise gay marriage at the top of the list.