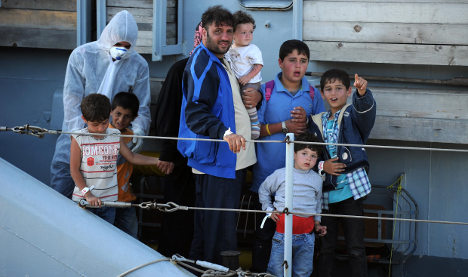 As Italy struggles under the weight of the persistent migrant influx, Luigi Ammatuna said the north’s anti-immigration stance was “spreading bad feeling” about migrants across the entire country.

Pozzallo is a port town in the Ragusa region of Sicily that has been seen huge numbers of refugees land in recent years, many of them children travelling alone.

“It’s not right what people in the north are doing,” he told The Local.

“They are heartless and selfish. It’s incredible that they are refusing to all work together to help the government manage the crisis.”

Lombardy president Roberto Maroni said on Sunday he would be writing to local mayors and prefects in his region to warn them not to accept any more “illegal immigrants” allocated by the government. Municipalities that did not tow the line would have their funding from the region cut, he said.

Giovanni Toti, the newly-elected president of Liguria, backed that stance.

Luca Zaia, the right-wing president of Veneto, said the region that includes Venice was: “Like a bomb ready to go off. The social tensions are absolutely crazy.”

The northwestern region of Val d'Aoste has also refused to welcome more migrants, citing a lack of facilities.

In contrast to the north, Sicilian towns have rushed to open migrant welcome centres, including several specifically for unaccompanied children.

Ammatuna said Pozzallo residents had “pulled together” to help, including giving clothes, food and medical assistance.

“We in the south have a very big heart,” he said.

“People from Pozzallo understand they need help, even if they themselves are struggling.”

Italy’s Interior Minister Angelino Alfano also slammed behaviour in the north as “profoundly unjust”, saying it risked placing ever greater strain on the poorer south, which despite struggling with high unemployment “has helped the state face this emergency.”

Italy's reception facilities are at breaking point with nearly 80,000 asylum seekers or recently arrived migrants currently accommodated across the country.

Since the beginning of the year, 103,000 refugees and migrants have risked their lives, often on flimsy boats, to reach Europe, the UN refugee agency said on Tuesday.