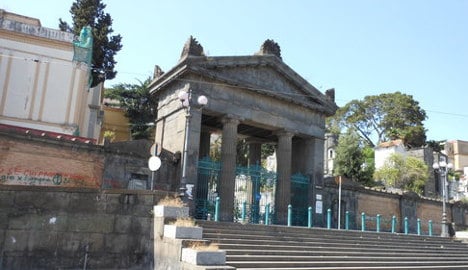 The gang allegedly emptied graves and resold the plots at Poggioreale cemetery in Naples. Photo: CityClass

Grave robbing might be a crime that many of us associate with a bygone era, but for more than five years this canny gang managed to tap into the lucrative burial plot market at one of Europe's largest cemeteries.

The gang would empty tombs and chapels – some of them dating back to the 19th century – at Pioggioreale cemetery and dispose of the human remains, before selling the plots for thousands of euros, Adnkronos reported.

Police caught wind of the grave goings-on in 2012, when a family pressed charges after returning to the city to find their loved one's burial plot occupied by a newly restored chapel complete with gate.

Roberto D'Auria, the judge in charge of preliminary investigations, said the gang had an elaborate system worked out that involved a “circle of informers.”

It was made up of a notary, who is accused of providing false deeds for the plots, as well as two owners of a local funeral parlour.

Fourteen others were also involved, including employees of the city council who were responsible for finding forgotten tombs that were fit for “recycling”.

Public prosecutor Vincenzo Piscitelli highlighted the grim reality of “recycling”, stating that it involved more than giving an old tomb a lick of paint.

“Above all else, the tombs needed to be emptied of their human remains, which were then disposed of who knows where,” he said.

Once the gang had identified, emptied and restored a tomb, it was ready to be sold.

Some of the plots were even sold online. One gigantic burial chapel that was seized by the police had been placed online with a whopping asking price of €800,000.

Pioggioreale is the biggest cemetery in Naples and one of the largest in Europe. Laws currently prohibit the private sale of funeral plots. Owners wishing to give up their spot must inform the local authority, who will reallocate the space and collect a fee.

The high cost of burial plots in Naples means that grave robbing is a lucrative business. It costs between €10,000 and €50,000 for a plot – and even then, there's no guarantee it will be an eternal resting place.