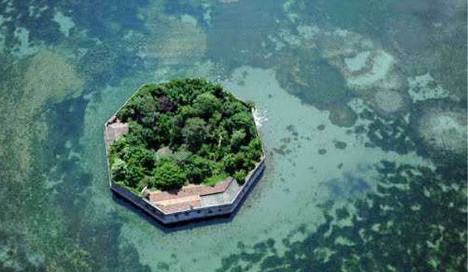 The octagonal-shaped island, called ‘Big Tree Octagon’ in English, is one of five built in the 16th century to defend Venice from naval attack.

The island remained a military base until World War Two, after which it was privately bought.

It has now been put up for sale by the heirs of the original buyer, who passed away.

Spread across 2,000 square metres, it has come onto the market with a ten-bedroom property and another smaller home.

“We have had some interest, not a huge amount, but enough,” Sebastiano Cavalieri Ducati, the owner of the Milan-based property agency, Ducati Case, told The Local.

The fortified island also comes with a chapel-like structure and a small square with a well in the centre, surrounded by benches, as well as the lush greenery that gave the island its name. The advertisement on the real estate website, Casa.it, also highlights the wonderful views of the lagoon, its proximity to an exclusive golf club, and how easy it is to reach Lido island, the location of the Venice Film Festival.

But what it fails to mention is that an uninhabited island – Poveglia, one of the five octagonal islands, and described as the most haunted place in Italy – is just across the water.

Poveglia is home to an abandoned hospital, which is rumoured to have hosted experiments on the mentally ill, including crude lobotomies, between 1922 and 1968. The hospital’s director is said to have killed himself after being “driven mad” by ghosts.

The island was also used as a quarantine station for people with infectious diseases in the 18th century after a plague was found on two ships.

Meanwhile, an American TV presenter who visited the island for the Travel Channel series Ghost Adventures claimed to have been briefly possessed by a ghost there.

But that didn’t stop an Italian businessman from buying Poveglia after the cash-strapped Italian government auctioned it off with a 99-year redevelopment lease last year.