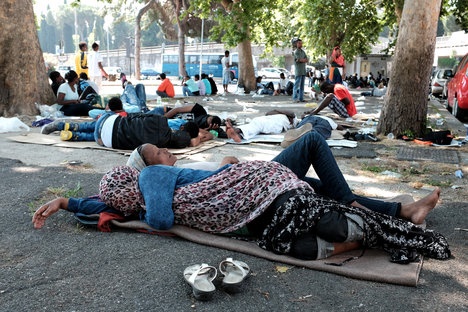 Hundreds of migrants had gathered on Piazzale Mazzoni for over a week, making a brief stop while arranging transport to northern Europe, where they hope to find long-term security.

Mostly from Ethiopia, Eritrea and Somalia, they had travelled to Rome from Sicily after being rescued at sea.

As Italy struggles under the migrant influx, and tensions escalate after some northern regions refused to help house them, they slept on sheets or cardboard boxes, with meagre possessions in plastic bags lying beside them, Roma Today reported.

But police raided the makeshift camp on Thursday, detaining 18, while more than a hundred are reported to have fled.

Mary Stuart-Miller, a British expatriate who helps the Sant'Egidio religious community distribute meals to migrants and Italian homeless people who congregate around the station, told The Local that “the pavements were lined with faces”.

“It was so shocking.”

Many more migrants have taken shelter in the nearby asylum centre, Baobab, on via Cupa. But with numbers inside the centre reaching over 700, the conditions are becoming too crowded, Il Messaggero reported.

Meanwhile, Milan's centeral station has been another gathering point, with 800 arriving each night, Reuters reported. Citing a city official, the news agency said they are given beds in local shelters.