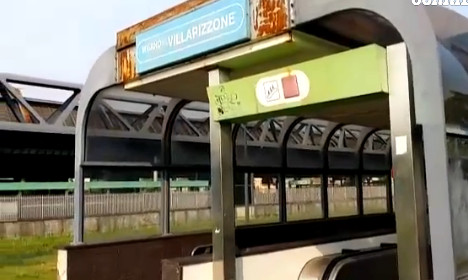 The attack happened at Villapizzone station, in the outskirts of Milan. Screengrab: Corriere TV

The group allegedly attacked the inspector on Thursday after he asked to see their tickets, Corriere reported.

The attack happened at Villapizzone station, on the route to the busy Expo exhibition.

The group was reportedly from South America and included three to five men and one woman.

One allegedly pulled a machete out of a bag and attacked the conductor with such violence that he may lose his right arm.

The victim, aged around 30, was taken to Niguarda hospital, where he underwent a long and delicate operation to try to save the limb, a doctor told Corriere.

“The prognosis will become clear in the next few days,” the doctor said.

An off-duty railway employee, who intervened to help his colleague, was also attacked, suffering a blow to the head that left him with cranial trauma.

He was taken to Fatebenefratelli hospital. His injuries are not believed to be severe.

The group managed to escape into the poorly-lit streets around the station before the police arrived.

Two men, however, have since been arrested, one of whom was apparently found covered in blood.

They are now being questioned. The police are also taking statements from the few other passengers who were aboard the train.