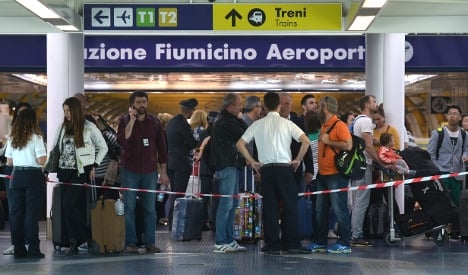 Capacity at Rome's Fiumicino airport will gradually be reduced to 60 percent from Saturday as “a precautionary measure” after the May fire forced the closure of the security gates in terminal three, which handles international flights.

Passengers have been checking in for flights at other terminals but the increase in traffic is putting a strain on the system, the Enac authority said.

Air France-KLM, one of the airlines which flies in and out of terminal three, told AFP on Friday that it would be cancelling some flights — but added it hoped to accommodate affected passengers by using larger long-haul aircraft.

Some 11 million passengers passed through Fiumicino airport between January and April, according to official figures, a rise of 8.3 percent on the same period in 2014.

Rome's main airport was thrown into chaos at the start of May after a blaze triggered by an electrical fault in a bar broke out in terminal three.

It took more than five hours to bring the overnight fire fully under control, by which point it had devastated a shopping area with a string of up market boutiques.

Staff working near the affected area have been ordered to wear air pollution masks and have seen their shifts cut to a maximum of four hours.

The terminal is one of four at the airport and serves flights to European countries outside the Schengen no-borders zoneand destinations further afield with the exception of Israel and the United States.