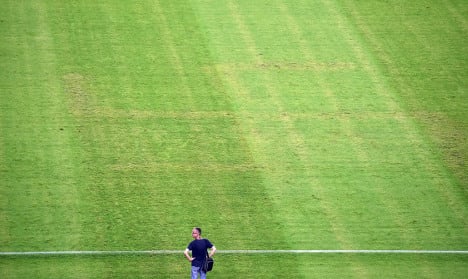 With the match being played behind closed doors after fans twice disrupted their team’s 1-1 draw with Italy at San Siro in November, the symbol – usually associated with the Nazi party – was spotted during the first half of the Euro 2016 qualifying match, which also ended in a 1-1 draw.

“This is sabotage and a felony,” said Tomislav Pacak, a Croatian Football Federation (HNS) spokesman. “We expect police to identify the perpetrators.

“This is a disgrace not just for the HNS but for the whole of Croatia.

“As far as we have learned, the symbol was imprinted into the pitch between 24 and 48 hours before the match so that it could be visible during the game,” added Pacak.

The result leaves Croatia top of Group H two points ahead of Italy.