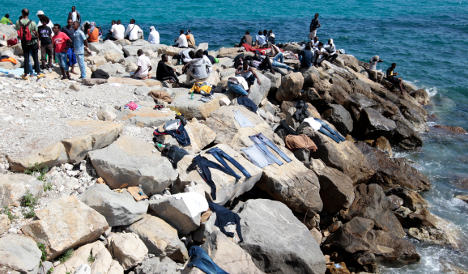 Migrants dry their clothes on rocks as they wait to cross into France, in the Italian city of Ventimiglia. Photo: Jean Christophe Magnenet/AFP

The country is struggling to accommodate an endless wave of boat migrants, and a crackdown on security at the borders with France and Austria has exacerbated the situation, causing a bottleneck at Italy's train stations.

The crisis “should not be underestimated”, Prime Minister Matteo Renzi said, as Austria, France and Switzerland expelled asylum seekers back onto Italian soil.

“Let me be clear, Europe's answers so far have not been good enough,” Renzi added.

The EU is having difficulty achieving consensus for its proposed migrant distribution plan – under which 24,000 refugees would be taken in by other countries – but Italy is hoping an EU summit on June 25-26 will go even further.

“If Europe chooses solidarity, good. If it doesn't, we have Plan B ready. But it would first and foremost hurt Europe,” he said, without providing details.

Renzi has come under pressure to take a stronger stance with the 28-member bloc, with the anti-establishment Five Star movement suggesting Italy threaten to freeze its EU budget contributions if aid is not forthcoming.

“I cannot reveal our Plan B,” Interior Minister Angelino Alfano told Sky TG24, “but if Europe is not supportive, it will find itself dealing with a different Italy. We will not accept a selfish Europe.”

Alfano said he would ask the EU at a meeting of interior ministers on Tuesday for “fair distribution of migrants, camps in Libya and a serious policy on repatriation” of economic migrants.

Any such plan for camps would hinge on Libya's opposing factions reaching a political agreement, or Italy convincing the UN to adopt a resolution.

Over 57,000 migrants and asylum seekers have been rescued at sea and brought to Italy so far this year – up from 54,000 at the same time last year – Renzi said, and Rome wants both a long-term solution and help from other countries now.

It wants the EU to forge repatriation deals with African nations and share the cost of returning home would-be economic migrants, who currently make up around 60 percent of those arriving by boat.

Renzi will raise the issue with his British and French counterparts when they travel to Milan this week, as well as speaking to European Commission head Jean-Claude Juncker and German Chancellor Angela Merkel.

Under the Dublin convention, refugees must apply for asylum in the first country of entry to Europe — a rule which Italy says is unfair as it leaves Rome to deal with the thousands of migrants washing up on its shores. Greece has also long complained of being left with the same problem.

The Dublin convention “should be changed,” Renzi said, insisting the current chaos in Libya – from where many of the boats depart – is “Europe's responsibility in light of the (military) intervention four years ago” by Nato to help rebels unseat dictator Moamer Kadhafi.

The Schengen open borders accord has until now meant those landing in Italy can usually easily travel through neighbouring France, Austria, Switzerland and Slovenia as they seek to make it to Britain, Germany and Scandinavia. But border controls were temporarily reintroduced by Germany last week ahead of hosting the G7 summit.

A subsequent tightening of the frontier at the French-Italian border as well, where police have refused entry to people hoping to head to northern Europe, has sparked migrant protests.

Some of the men, women and children from Somalia, Eritrea, the Ivory Coast and Sudan said they had initially made it across the border into France by train, but been arrested and escorted back across the frontier by police.

Austrian police also announced on Sunday they would be returning to Italy 24 African migrants arrested while trying to get to Germany by train.

In Switzerland, border police spokesman Attila Lardori said 240 migrants were expelled back to Italy over the weekend,adding that officers on average round up between 30 and 50 migrants a day on trains crossing between Italy and France.

The standoff at Ventimiglia on the border with France raisedparticular concern in Italy, with the anti-establishment Five Star movement saying “Paris is treating migrants like parcels to return to sender: it's shameful.”

The crackdown has increased pressure on Italy's already overcrowded reception facilities, with hundreds of people sleeping rough in the main train stations in Rome and Milan.

As television images showed yet more arrivals by sea, authorities in Milan rushed to convert a warehouse into a centre,while in Rome the civil protection agency set up a temporary tent camp.

Migrants sporting scars from wounds suffered in conflict-hit homelands or lawless Libya were tended to by the Red Cross.

Around 1,800 people have drowned attempting the crossing so far this year, according to the International Organization for Migration (IOM).