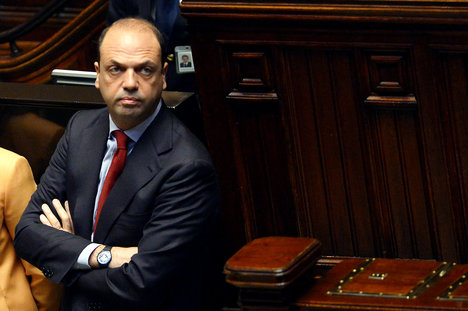 “It is the proof that they do not want to stay in Italy. They want to go to (other parts of) Europe and they consider our country as a transit country,” Alfano told the Raitre television channel.

The minister's comments reflected mounting anger in Italy over moves by its neighbours to stem the northward flow of asylum seekers and other recently-arrived boat people.

Increased checks at border points and on cross-border buses and trains have resulted in a spike in the numbers of people being sent back to Italy in the last two weeks.

That has increased the pressure on the country's reception facilities and led to a very visible build-up of migrants sleeping rough in and around major train stations: a development that has been pounced on by far-right politicians.

At Ventimiglia, an Italian border town on the Riviera, dozens of migrants refused entry by France have been camped out since last week demanding to be allowed to cross the frontier.

Prime Minister Matteo Renzi threatened on Sunday to implement a “plan B” to deal with the migrant crisis that would “hurt” Europe.

Renzi did not specify what options he was considering but Italian media reported Monday that Rome could start issuing newly arrived migrants with temporary visas giving them the right to travel throughout Europe's border-free Schengen Area.

Such a move would be politically explosive as it would undermine the Dublin accords under which EU governments agreed that asylum requests should be processed by the member state where the applicant first arrived.

Italy is also considering preventing British, French, German and other naval ships from landing migrants rescued in the Mediterranean at its ports, effectively forcing those countries to accept responsibility for them.