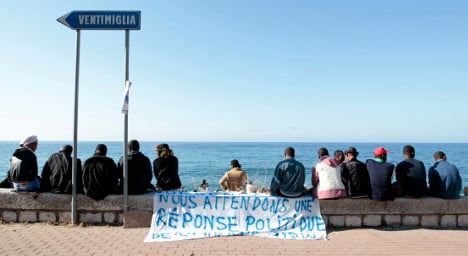 At Ventimiglia, an Italian border town on the Riviera, dozens of migrants refused entry by France have been camped out since last week. Photo: Jean Christophe Magnenet/AFP

“They shouldn't come back (to France) and they must be taken in by Italy,” French Interior Minister Bernard Cazeneuve told rolling news channel BFMTV.

At Ventimiglia, an Italian border town on the Riviera, dozens of migrants refused entry by France have been camped out since last week, demanding to be allowed to cross the frontier.

“What's happening at Ventimiglia? We need to obey the rules of Schengen and Dublin,” said Cazeneuve, referring to EU treaties governing borders and asylum-seekers.

“What are these rules? When migrants arrive in France and have been processed and registered in Italy, European law implies that they be sent back to Italy,” said Cazeneuve.

The minister said that 50,000 migrants had arrived in Greece and a similar number in Italy.

Economic migrants that “want a better life in Europe” cannot be admitted, he said. “We can't welcome them in. They must be taken back to the border. To Africa,” he said.

“Then there are those who have refugee status, who have experienced abuse and persecution. They are coming to Europe because they want to carry on living. It's that simple,” said Cazeneuve.

“For these people, we have to examine their asylum request. But five EU countries are taking in 80 percent of asylum-seekers. This isn't possible. We need to share the asylum requests,” he said.

The French minister's comments came amid growing anger in Italy over moves by its neighbours to stem the northward flow of asylum-seekers.

Earlier on Monday, Cazeneuve's counterpart, Italian Interior Minister Angelino Alfano, said that the images of dozens of migrants stuck at Italy's border with France represented a “punch in the face for Europe.”

Increased checks at border points and on cross-border buses and trains have resulted in a spike in the numbers of people being sent back to Italy in the last two weeks.