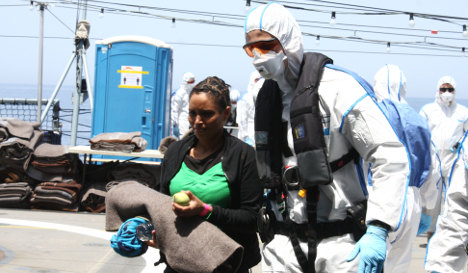 A German sailor helping a refugee aboard the frigate Hesse in May. File photo: DPA

In a statement released on Tuesday, the Bundeswehr said the 335 men, 148 women and 61 children were brought aboard the frigate Schleswig-Holstein after they were picked up 85 kilometres from Libya's capital Tripoli betwen 9 am and 4 pm.

Italian sailors took over the two damaged wooden boats which the refugees were found in and sunk them so that they didn't endanger other shipping.

Schleswig-Holstein will now transport the refugees to the southern Italian port of Reggio Calabria.

The ship is expected to arrive at around 6.30 pm on Tuesday.

Two Bundeswehr (German military) ships have been deployed to the Mediterranean since the beginning of May to take part in sea rescue operations.

The government extended their initial 30-day mission to an indefinite one as refugees continue to set off from the North African coast towards Europe in unsafe craft.

So far the German navy has helped rescue around 4,000 people, including another group of around 400 in early May.