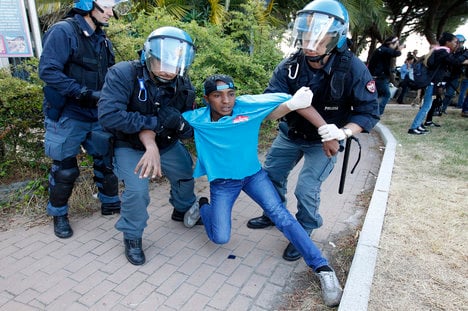 Most left peacefully but some had to be physically removed from their makeshift home by police in riot gear, who then forced them into Red Cross vehicles.

Some men managed to evade the police and fled in the direction of the rocks near the sea, whereupon authorities gave up the chase.

Several set up camp on the rocks overlooking the sea complete with makeshift beach umbrellas and towels.

At least one police officer was injured in the clashes and was treated at the scene.

According to local authorities on the French side of the border, around 300 migrants, mainly from the Horn of Africa, were picked up in France and sent back to Italy last Friday.

Since then, around 150 migrants have been arrested every day on the French side of the border.

Around 250 migrants – most of them English-speaking Africans – have been camped in the border town of Ventimiglia for four days, protesting that they should be allowed to enter France on their way to their desired destinations in northern Europe.

They have become a source of tension between France and Italy, with Italy's interior minister describing their plight as a “punch in the face for Europe.”

Italian Interior Minister Angelino Alfano, arriving for EU talks in Luxembourg Tuesday, said that European solidarity is at stake if the 28-nation bloc fails to reach a deal on sharing the burden of the Mediterranean migrant crisis.

The European Commission, the EU executive, last month asked its member states to admit 40,000 asylum seekers from Syria and Eritrea landing in Italy and Greece.