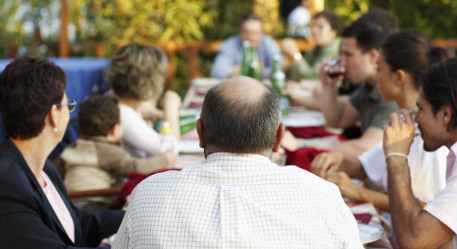 The birth rate among family-loving Italians has more than halved since the 1960s. Photo: Shutterstock

Italy’s birth rate has more halved since the ‘baby boom’ of the 1960s, with the number of babies now being born averaging about 500,000 a year. And that number continues to dwindle, with Istat, the national statistics agency, saying on Monday that there were almost 12,000 fewer births in 2014 than in the previous year.

But what is holding family-loving Italians back?

“If you have no money it would be irresponsible to bring a child into the world,” she told The Local in Rome.

“And the state doesn’t give you any help at all.”

Sylvia said her daughter worked in Germany and England, “where the state gives you more support”.

“There, if you have a job, you can afford to pay for your flat. But here, in big cities, even renting a room is so expensive. It’s impossible.”

Italy is slowly edging its way out of recession, with its economy growing 0.3 percent in the first quarter of this year.

But the unemployment rate – at 12.4 percent – still remains one of the highest in Europe, despite dipping slightly in April.

The lack of jobs and money is preventing young people from leaving home and starting a family, Silvia said.

“That’s why young people stay living with their families, not because they want to. There is no space to have a family.”

That said, Marzia, in her twenties, had a slightly different view, attributing the low birth rate to “women starting to work more”.

“They’re thinking about their careers, not about having children,” she told The Local.

Debora, a shop owner, said more women are delaying having children until they are settled with a job and a home.

“Women don’t have babies at twenty anymore,” she added.

“It’s more like forty. And if you start having children at that age, you can’t have many. And even at that stage, they’re thinking about advancing their careers too.”

Giuseppe Gesano, an associate researcher at Rome’s Institute for Research on Population and Social Policies, said little has been done by the government to encourage people to have more children, despite premier Matteo Renzi introducing an €80 a month “baby bonus” for familes with newborns for the first three years after a child’s birth in May this year.

“When you compare it to countries like France, little or nothing has been done to stimulate the birth rate, such as giving women with children more flexibility to work and assistance with child care,” he told The Local.